Posted By Laura in Featured, In the Home, The Four the Laundry the Life, The Woodburner | 0 comments

We’re so very excited about the latest project in the House of LittleStuff. When we built our extension 143 years ago we always intended to have an open fire. But architects and builders being what they are, issues with the plans meant that once the foundations were complete and the walls going up, it was established that the planned fireplace couldn’t happen, and there was no budget left to re-arrange the existing works to put in a new one.
So we ‘temporarily’ opted for a gas fire, and decided to put in a woodburner in a year or so.
Ha.
But here we are – 12 long years later and we’re about to install a woodburner. At last!
But once we’d made the decision that this would be our year, we got stopped in our tracks.
We know nothing about woodburner stoves! Which are good, which we’d need, which we could physically have in our living room.

Because it’s not just a case of purchasing one you like the look of and plopping it up against the wall. Oh no.
There are all manner of H&S regs and laws that must be obeyed to ensure it keeps you safe as well as warm and toasty.

We had a few local ‘experts’ come and advise us, and quote on what we needed. Two never showed up, one showed up and never provided a quote, and a fourth quoted, but told us that he couldn’t fit us in until next April.
Yikes.
Finally we found a fab local firm, who not only gave us sound advice and a prompt quote, but also have a showroom so that we could see al the stoves in action.
Which was really important, because the type we had agreed would work best while chatting at home we really didn’t like when we saw them ‘for real’.

What we liked was not the sleek contemporary cool designs. Clearly we’re traditionalists at heart – we just like the old black box with the big doors.

And that started narrowing our choices – so many have doors that don’t actually sit open, or have tiny viewing windows. Eventually we realised the ones we liked were all from Arada Stoves (if you’re a bit of a woodburner aficionado you’ll probably recognise them more by their Villager or Aarow stove brands) – who happen to be just down the road in Devon.

This pleased us no end – choosing a stove that had been built from scratch here in the UK. So I got in touch with Arada, and they invited us down to see just how the stoves are made; how could we say no? I’ll admit, the children were not enthralled (picture an array of faces varying between sardonically raised eyebrows, glum mouths, and feigned polite interest), but we had a sneaky feeling it would be far more interesting than they expected. So last Friday we took the younger three, and drove across to Axminster in Devon to visit the factory. 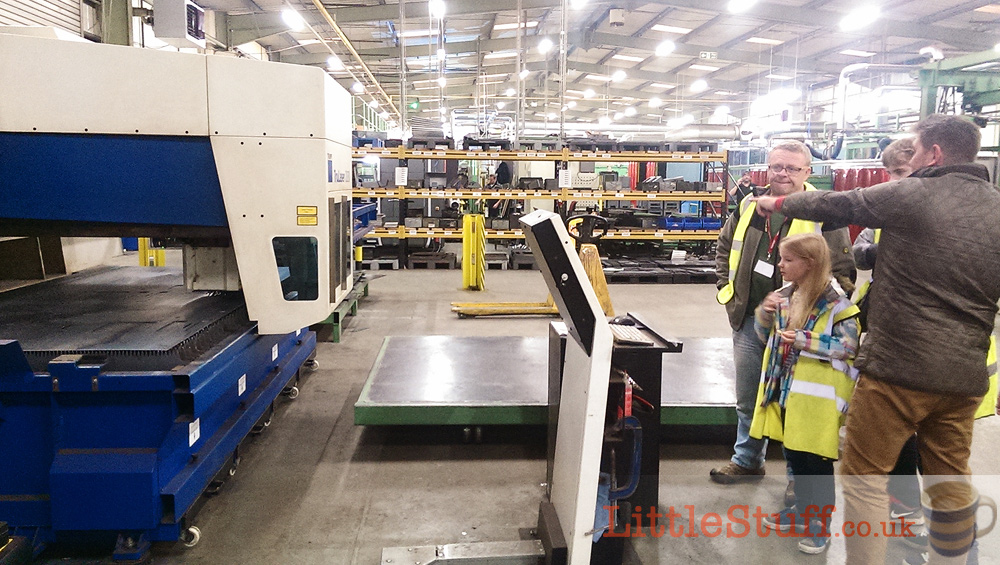 So here’s where the woodburner begins its life – it’s just one great big sheet of steel.
The big blue machine on the left there is a laser cutting a template; literally the sheets of steel are fed in like paper in a printer – the laser cuts out a template according to what’s on the computer screen we’re all looking at, and the sheet slides out the end as a stencil of shapes.
Really, just a bit cool to watch. 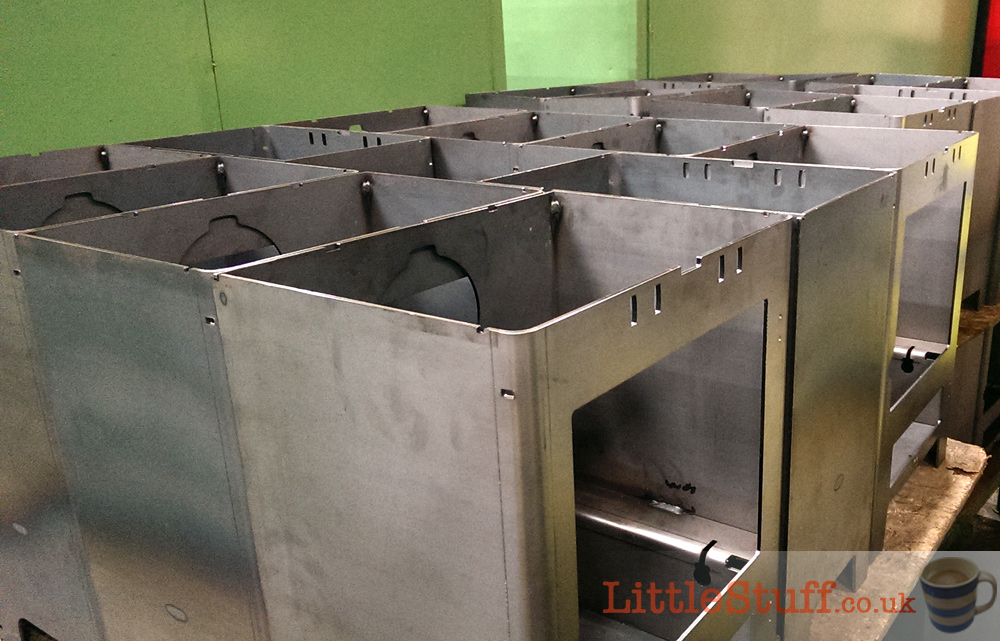 And then, like an oversized origami class, those template sheets are folded – and hey presto. You have yourself a woodburner skeleton! Interestingly, most woodburners have identical bones inside them – obviously they vary in size, but it’s the outside cladding and aesthetics that makes them individual. 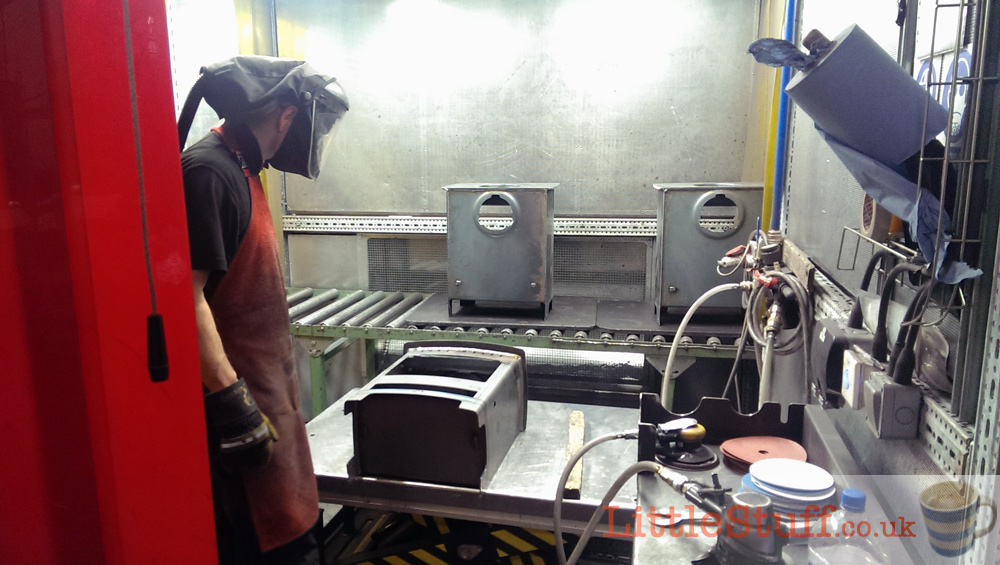 And so we moved further down the factory line – the factory really is one enormously long room, following the story of the construction in a seamless line.
At this point the noise was REALLY LOUD, much to the boy’s pleasure and Bear’s dislike – even with ear defenders in. Next we came to the welding rooms – the little red-curtained booths on the left. This is where they…um… welded!
It was really good to see it all done by man-with-welding-equipment; there are other areas where the welding is completed by robot arms, but they’re not always in use. It was such a nice feel to the factory, full of skilled people and not the line of machines I was expecting (do note the rollers at the back – such an awesome system as the stoves just slide on through production from booth to booth). 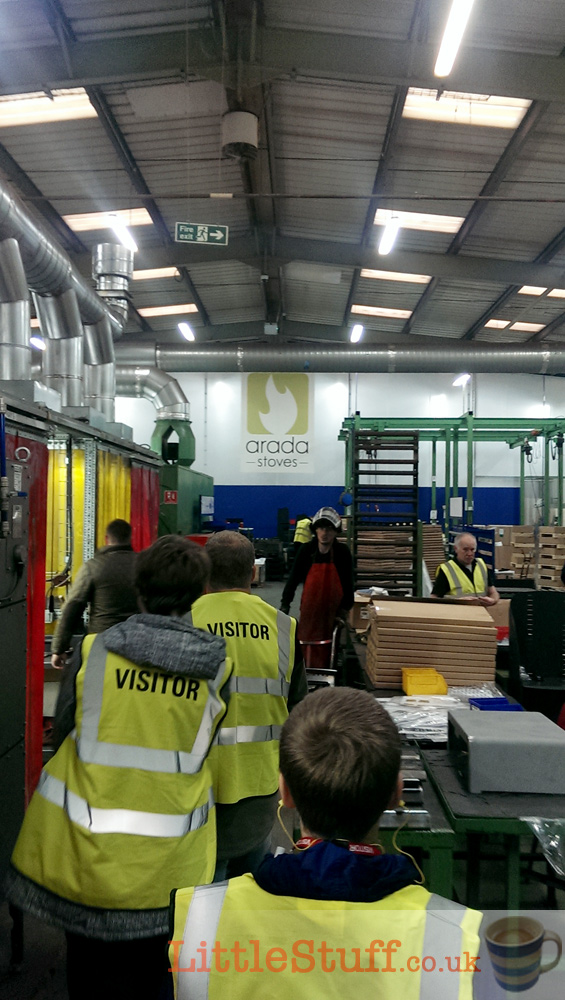 Onwards again, and more booths to see – after the welding there’s smoothing off to be done (yes, yes, I was totally paying attention and taking notes on the technical terms. If it was wood, it would be called sanding, okay?). The thicker lid steel wasn’t cut by the laser we saw at the beginning, but by a plasma instead. It’s quicker at cutting the thicker steel, but leaves a rougher finish which needs to be fixed at this point, along with the welding spots and edges to ensure that your finished stove is smooth and dandy. 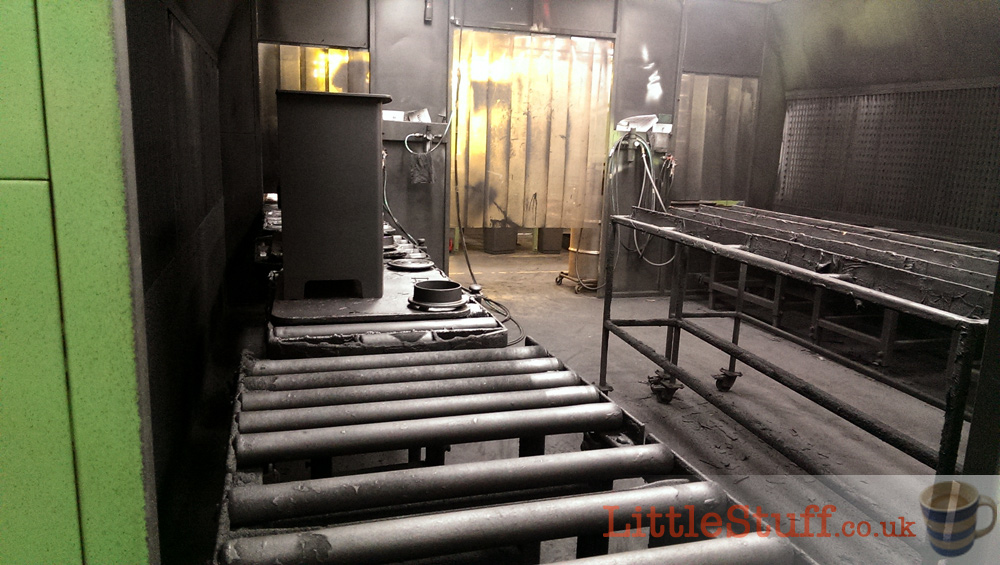 The rollers keep going through welding, metal-sanding (*cough*) and on into the finishing room where they are sprayed with a special heat-resistant paint and left to set.
They used to be a bit Ford in their production “you can have any colour you like as long as it’s black” (and yes, I know that’s an urban myth that Henry Ford never actually said), but now stoves come in a huge range of shades – you can mix it up with a plain black or grey stove with a brightly coloured door if you wish, too.
I have to say I’m not overly convinced on the practicality of a cream woodburning stove, mind. Wouldn’t you be forever cleaning the damn thing? 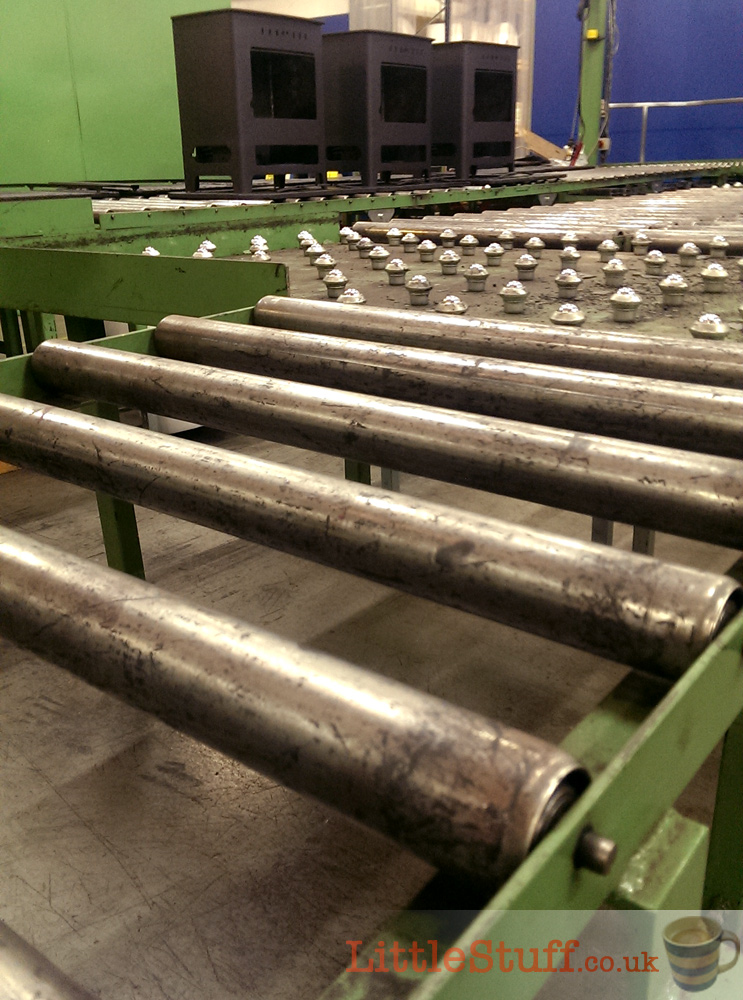 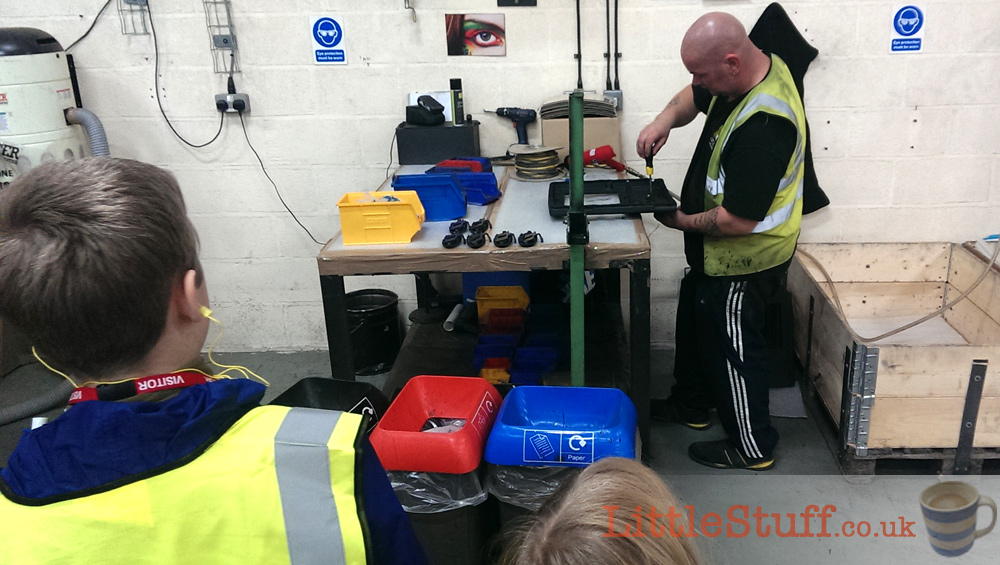 And look at this. It’s unbelievably reassuring that right at the end of the line is a man-with-a-screwdriver, putting on the handles.

Once we were through production, we whisked through the packaging warehouse (yes, there’s so much packaging used that it has its own warehouse. But we love Arada’s idea on the waste; whilst the cardboard is currently recycled, they’re investigating how to make it into firelighters, which is genius. All the leftover cut-off steel bits are collected by the steel manufacturers from Wales, taken back and re-used. 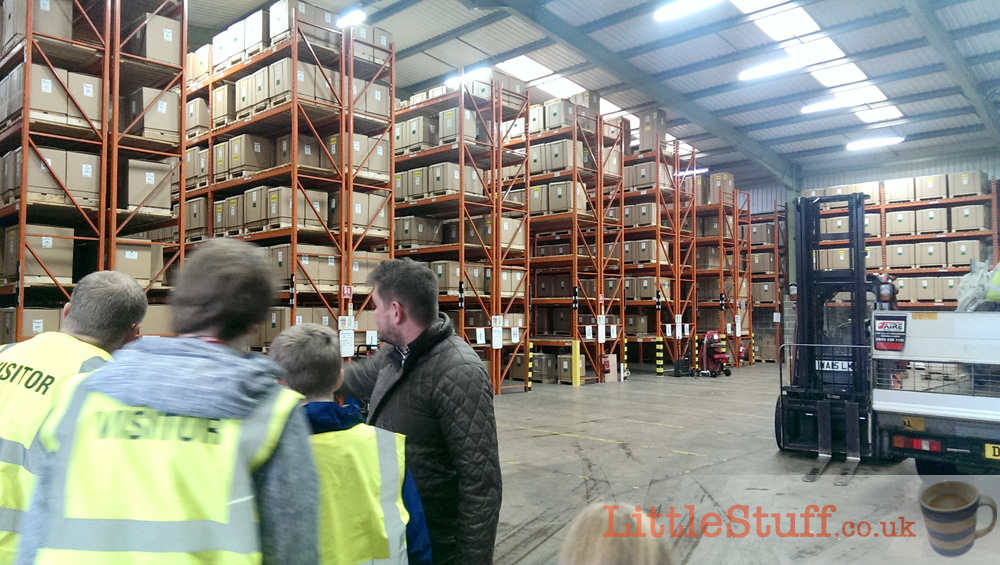 And then we went to the main warehouse. Oh my wordy word. LOOK at the size of it! I admit, we got a bit over-excited by the extreme forklift system. It’s properly clever – they’re guided down the aisles by metal tracks under the floor, so there’s never any deviation, and clearance is within inches either side. And they cant stack all the way to the ceiling because it’s not just the forks that lift up, the entire cab does – which means the driver is always at eye level, and therefore has excellent visibility over what he’s doing. AND the forks lift sideways, so there’s no need of a turning circle when they pop out of the aisles.
(Sorry – I did tell you we got a bit over-excited in the warehouse…)

We had such a great visit – even the children loved it, despite their antipathy to the trip (PLUS Arada gave them sweets at the end, so, y’know, they’re easily bought…). On the drive home we talked a lot about British Manufacturing, and how important it is to support our own industries. We’re absolutely thrilled to be working with Arada, and shouting about their amazing quality and products to all of you.

Oh, and we decided on our stove. Want to see?
Of course you do.

We’ve opted for the Villager Duo. Gorgeous, no? It’s perfect for us – great big doors that open wide if we want them to, the traditional look (that we didn’t realise we wanted until we saw the more contemporary ones), and it’s also multi-fuel so we have the option of bedding it down with coal if we wish to. I foresee a winter that’s toasty and warm…