Posted By Laura in #New!, Eating out, Family Days Out, Review | 0 comments

On Monday we had a spontaneous trip out, courtesy of the lovely folks at Harvester, who thought we might like to try their new Kid’s Menu. I did point out that only one of us would be on the kid’s menu – teen boys tend not to be satisfied with the portion sizes for a 7yr old, I find – but that was all fine, so we duly headed off to Salisbury, to the Old Castle which happens to be very close to Old Sarum, a lovely spot for a bit of a stroll afterwards. 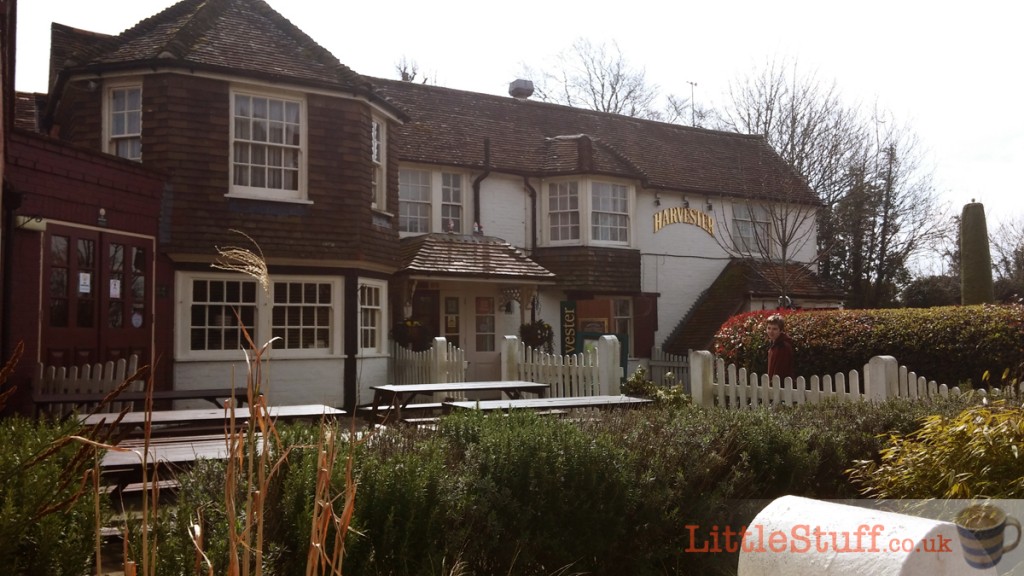 Despite being an obvious chain, the Old Castle has a lovely relaxed atmosphere, and staff were immediately approachable and friendly – which makes all the difference between chain restaurants.

Seats were found, menus examined, and the deliberating began. Bear was there to sample the new Kids Menu – which at first glance was a total bargain at £5.99 all in.

There are actually two kids menus to choose from – the ‘Smaller Bites’ for under 5’s and the ‘Bigger Appetite’ menu for those bigger-than-toddler portions but not quite up to adult sizes yet. 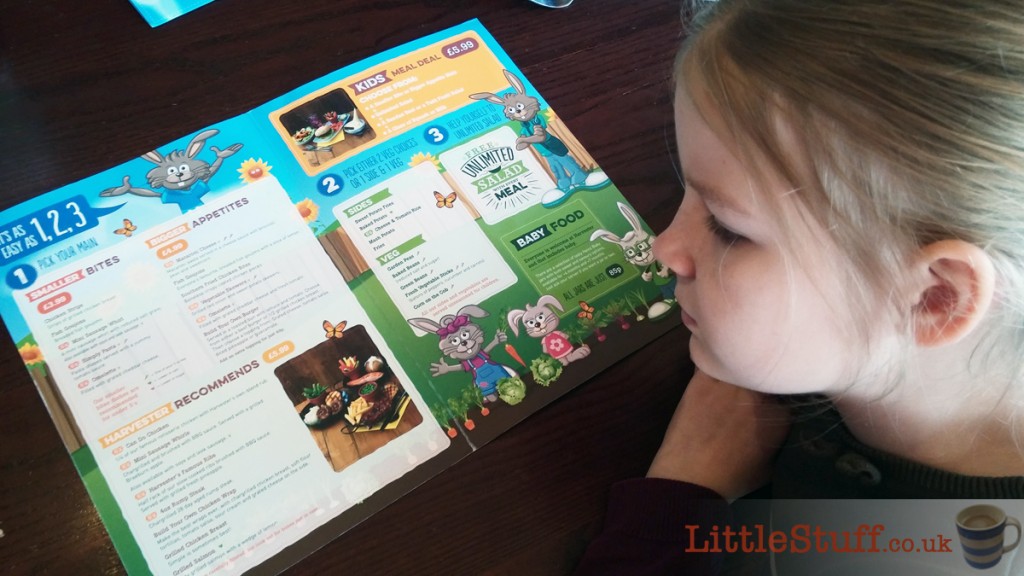 You pick a main, a side, a veg choice, still get the unlimited salad bowl that comes with every meal, a drink… and dessert too.
See? TOTAL bargain.
Bear was keen for the macaroni cheese – but the vegetables come mixed in with the cheese sauce (great from a parents point of view, but not perfect for a fussy veg-eater. We asked if they could be left out, but they couldn’t). So instead she opted for the tomato pasta from the Smaller Bites menu (even though she’s 9) and had it with chips to make sure she wouldn’t still be hungry.

The teens and husband all chose a variety of burgers, and I opted for the Triple Chicken.
We headed for the salad bar while we waited – which was great, actually; the salad was fresh and varied, and the couscous was particularly good. And as we’d all ordered the bottomless refills we all got to play with the drinks machine. It never gets old, does it? But it’s rare I can get a Cherry Pepsi Max except from a supermarket, so I was happy. 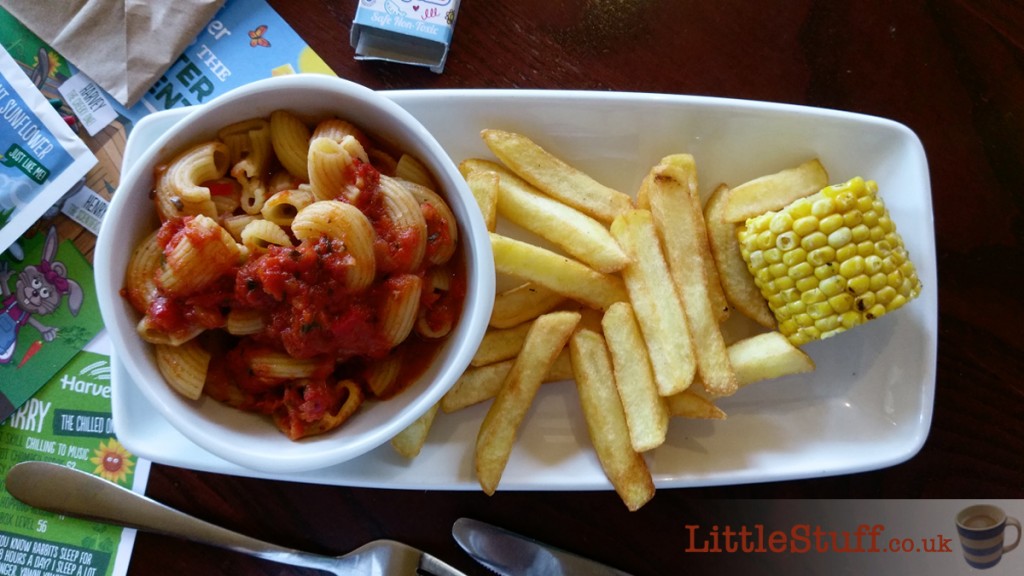 Food arrived just as we were spreading out to start the enormous colouring scene, obviously. A quick scramble for runaway crayons and we’d made room for actually eating.
It turned out that Bear’s ‘small’ pasta was more than big enough for her tiny appetite, and the sauce was properly ‘home-made-tomatoey’, which was great. To be honest, I think if she’s had a ‘Bigger Appetites’ meal there’s no way she’d have finished it. 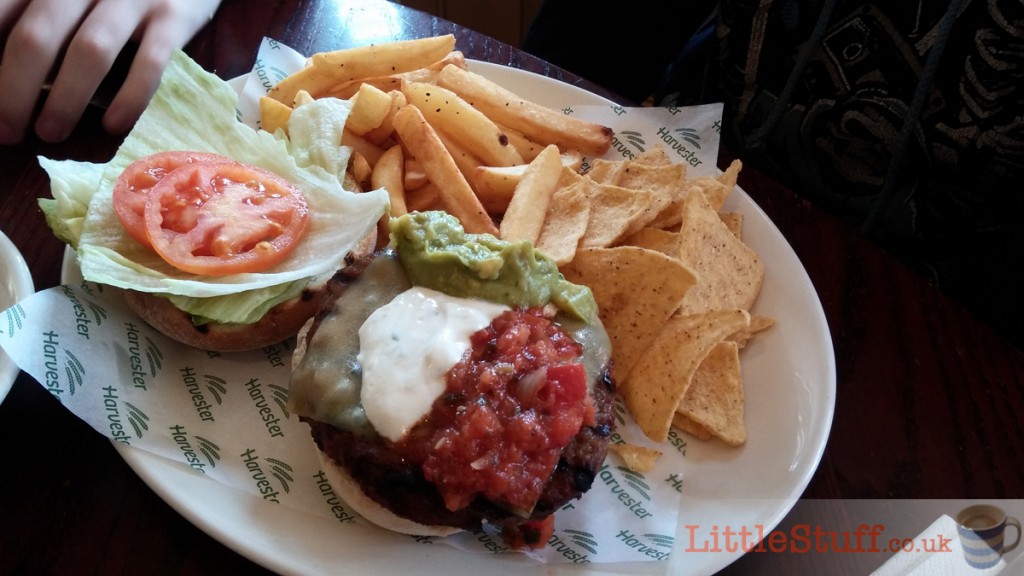 All the burgers were served ‘open’ which was slightly unexpected, but fine – except for the 13yr old’s Nachos burger. He’d picked it to enjoy the nachos and dips as his side, but having it served with the dips ON the burger meant he either had to leave his burger to grow cold while he ate the nachos & dip first, or else he had to scrape the dips off (and mix them all up) to eat his burger. Not ideal either way – he opted for leaving the burger to cool. 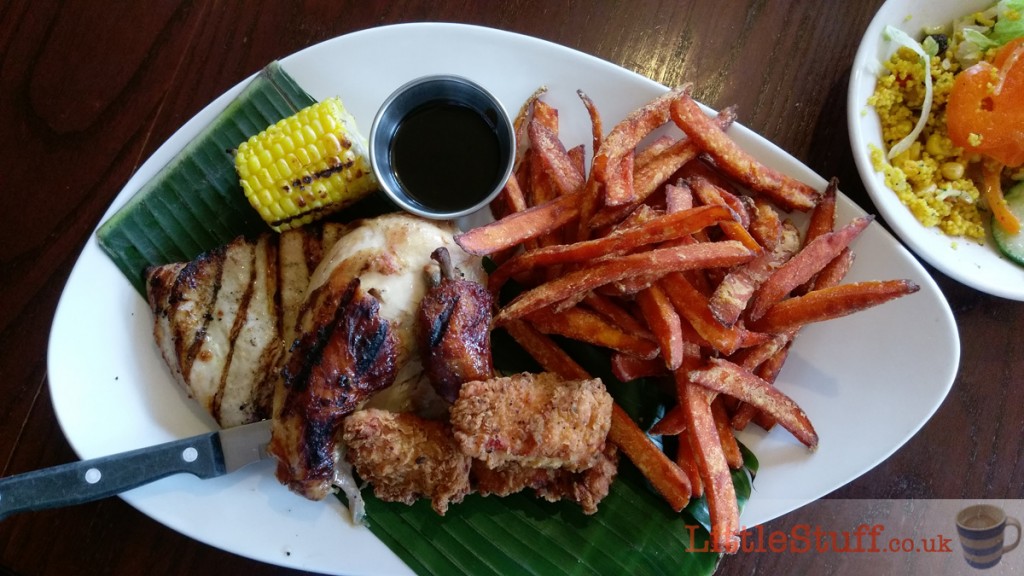 My triple chicken was excellent – a chargrilled chicken breast, ¼ rotisserie chicken in Harvester’s own-blend rub and pepper-crumb fried chicken strips. I switched to sweet potato fries (oh, they were goooood) and the ‘Dukes Smokey Ketchup’ was properly delicious. I was careful not to cut into that leaf when attacking my chicken though! 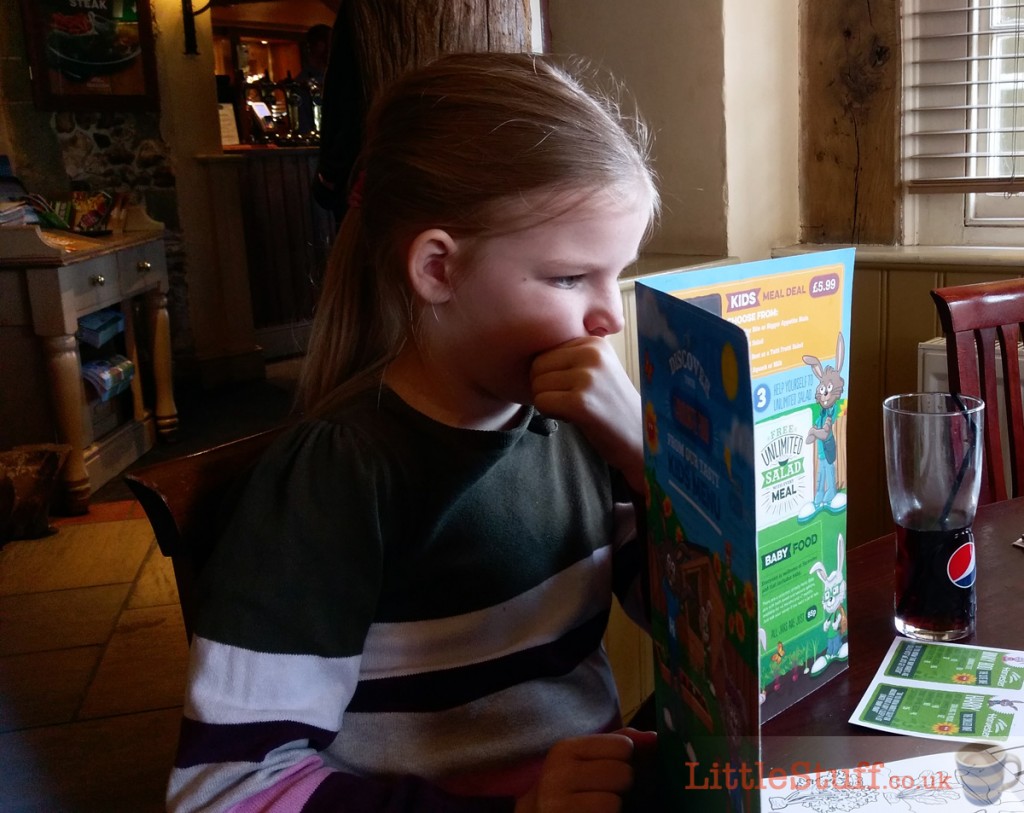 And then the menus came back out for the dessert choices. This one was even tougher, and took a LOT of decision making as you can see.
Eventually Bear opted for the Build Your Own Chocolate Cookie Pizza – a ‘cookie’ (which looks more like a pie crust actually) topped with chocolate sauce, then add your own touch with marshmallows, strawberries, toffee sauce and Cadbury’s chocolate buttons to create your own chocolate cookie pizza. 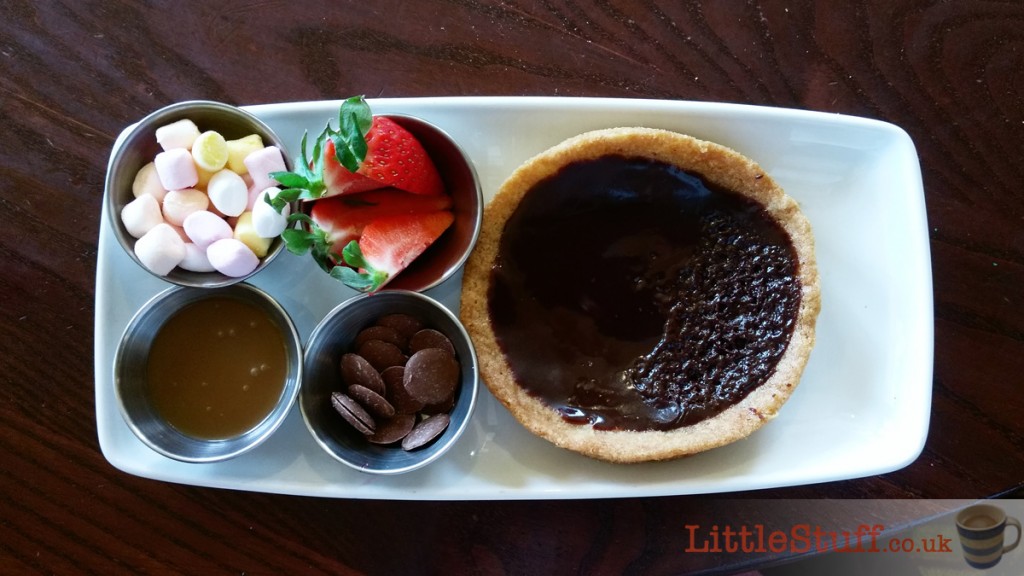 The ‘cookie’ is the size of a small tea plate, and she took a lo-o-o-ng time decorating it. 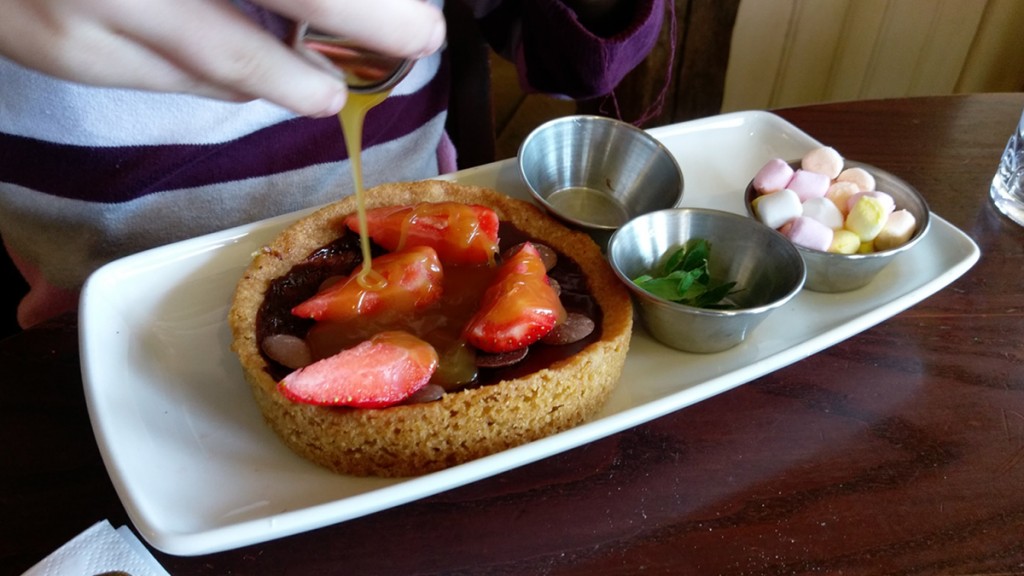 Cookie, chocolate sauce, caramel sauce, marshmallows, chocolate buttons. This is serious sweetness overload. It was delicious, but too big and sweet for my girl in the end, she only got halfway through it!

Everyone else was disgustingly satisfied with their desserts too – the stupidly enormous slab of (admittedly delicious, judging from my stolen bite) Chocolate Fudge Cake ought to come with a serious ‘this will ruin any chance of your trousers fitting for the rest of the afternoon’ warning.

The children also made happy use of the bottomless drinks, creating all manner of lovely (and rather worrying-looking) mocktails. Apparently cherry pepsi plus vanilla tango and lemonade is amazing. I’ll just believe them, I think.

We finally rolled ourselves back out of the Old Castle and meandered across the road to expend a little energy strolling around Old Sarum – we’re English Heritage members, so entry to the castle is free for us. But the Abbey remains are free for anyone, and it’s a glorious spot to work off all that fudge cake :) 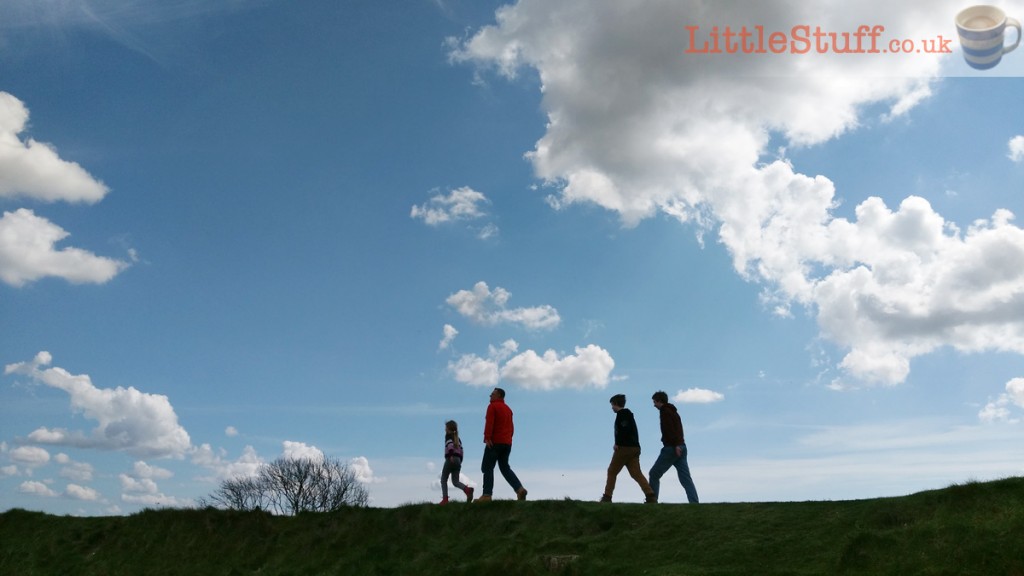 Our meal was excellent, the food was uniformly delicious and the service was really good. Special mention to our waitress Millie, who catered patiently and cheerfully to our random and ever-changing requests, and manager Neil who was great to chat to. It says a lot when a restaurant is busy on a Monday lunchtime off-tourist-season; and a lot of the guests were greeted by name. Clearly the locals know when they’re on to a good thing at the Old Castle in Salisbury.