Our recent trip to Bridgend started off with a visit to Bryngarw Country Park, and a sneaky peek at their coming attraction for this year, the ‘Keepers of Bryngarw’.
I’ll be honest – the children weren’t over-excited. Let’s be honest – a walk in the woods couldn’t really compare to quad biking, could it?
But I was looking forward to it, and the dog could join in this one, so I gave them ‘the look’ and they acquiesced gracefully enough.

On arrival we were met by Ranger Dan, and the lovely Gina, who were giving us the guided tour. As the Keepers Quest isn’t yet officially up and running, we had to use a little imagination – but from the time they spotted their first Keeper (we started in the Meadow) the children were totally involved, and having a ball. 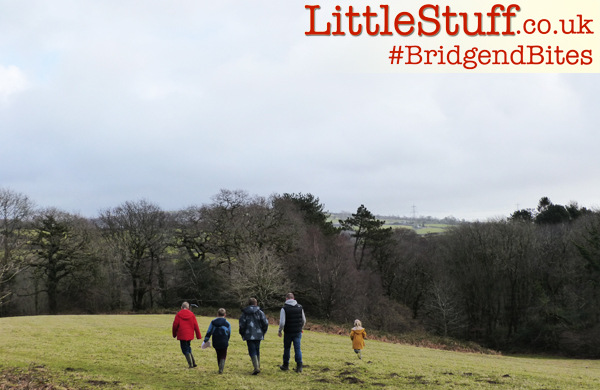 Off to find the Keeper of the River with Ranger Dan

The Keepers of Bryngarw are the mythical guardians of the park’s woodlands, meadows, gardens and river. The story goes like this:

“The Keepers are the ancient keepers of the story of the land; it is they who keep Bryngarw’s flame alight. But now the Keepers have fallen asleep, the story has fallen silent and a shadow hangs over the land.

To bring Bryngarw to life once more, you must journey through the gardens and woodland, along the river and across the meadows. Using the special Star Talisman, find the Keepers and awaken them at last, and re-light the flame as their story begins to be told once more…”

By the time it launches later this year, each keeper will be an interactive totem, in which you can place your star talisman and listen to their story. 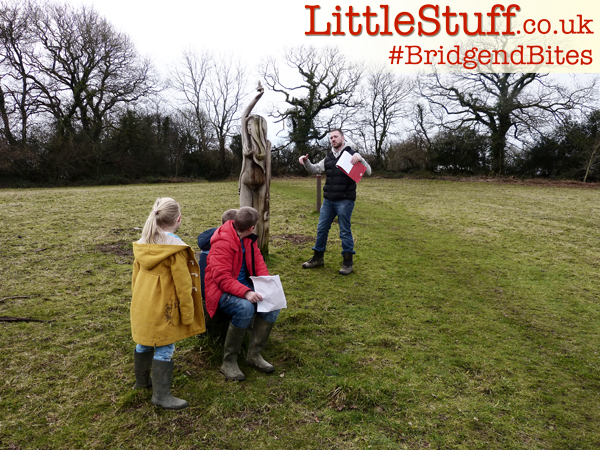 The Keeper of the Meadow – in the summer this is a wildflower meadow in which the keeper appears as you approach.

However – I think we went one better with our sneak preview, as the actor’s recordings aren’t completed yet; we had Ranger Dan (who wrote all of the stories) reading them aloud to us.
Which was pretty special – the writing is powerful and evocative, and his passionate love of the land and his enormous knowledge of the natural world shine through in every line. We were all entranced. 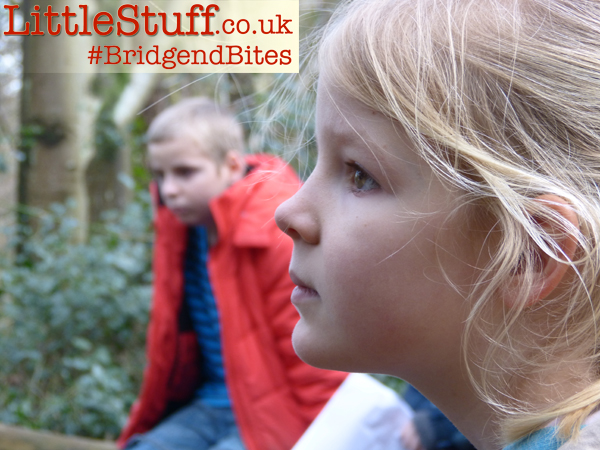 Listening to Ranger Dan tell us the story of the river

There’s no official route, you simply make your own quest to find all of the Keepers. In so doing you are encouraged to explore all areas of the wild and beautiful woodland and meadows of the Park (currently a shocking 70% of visitors to Bryngarw never leave the play area and tea room). You could probably whizz round and find them all in 40 minutes, but equally on a  nice day I’d suggest you take a picnic and take your time – stroll around, explore each area, play for a while and just ‘stop and stare’.

Our children are used to wide open spaces – pretty manicured formal gardens don’t hold much appeal for them. But at Bryngarw they were itching to play in the stream, explore the woodlands, and the meadows were just made for rolling down. 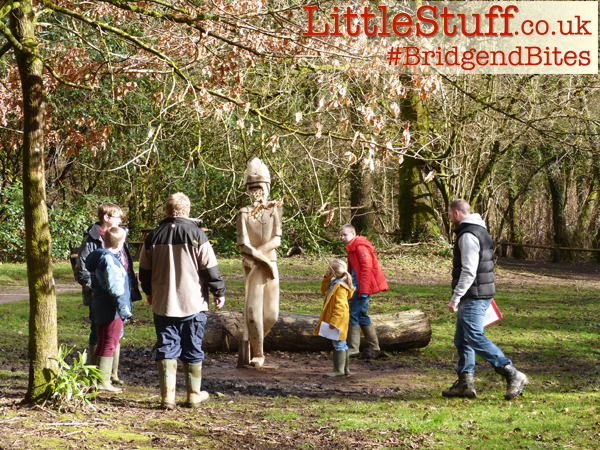 The Keeper of the Gardens – which are the formal gardens of Bryngarw House, a series of interlinked paths and ponds weaving through the tranquil oriental style garden, dating from 1910. 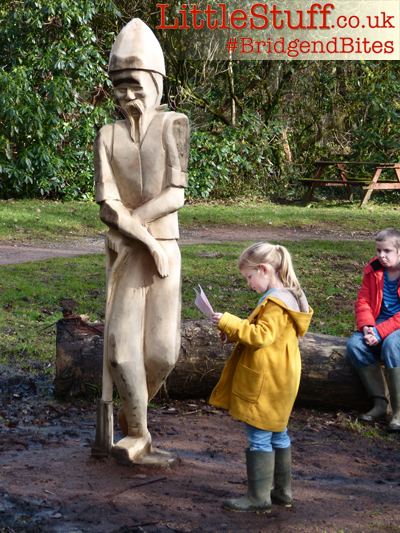 See? I want to sit and drink tea with him…

We had a genuinely fabulous morning – we loved the Quest idea, and it wasn’t just the youngest who went dashing off to try and be first to spot the next Keeper. The stories from the Keepers made all the children stand still and genuinely listen to what they had to say; and look around and notice with fresh eyes the things they talk about with such love. The Keeper of the Woodland was big, powerful and eery, but I wanted to make the Keeper of the Gardens a cup of tea and sit with him a while. The (very well-endowed) Keeper of the River had the most powerful story, told to the backdrop of the rushing river beside us, and the Keeper of the Meadow was so ethereal and flighty the 7yr old had to touch her to make sure she was real. 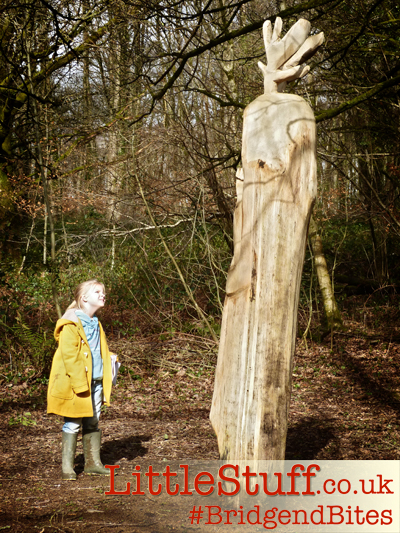 Cautiously approaching the Keeper of the Woodland – even in daylight he’s an impressive sight. Looming out of a misty clearing at dusk I can imagine he’d be pretty alarming…

We also loved the fact that each of the Keepers has been handcarved by a local craftsmen from a tree that has grown in the park and been  blown down by a storm. That circle of life, the knowledge that these trees really have seen the story of this landscape, and are now going to remain for potentially a hundred more years to tell their story to new people, created a strangely emotional connection to the park. 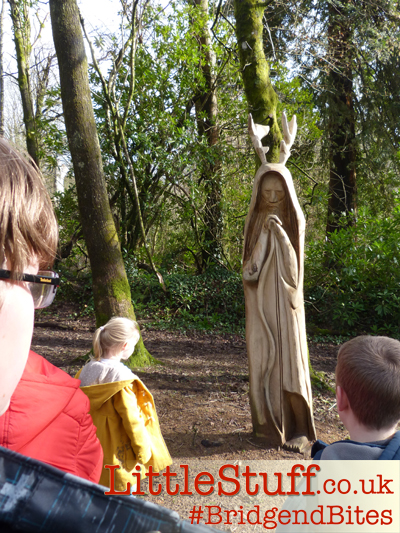 General Consensus voted his magnificence the Favourite Keeper overall. Notice how far back everyone stood from him – the picture just doesn’t convey his sense of quiet power as you come across his clearing set deep within the woodland.

We loved our time at Bryngarw, and have had to promise the children we’ll return in the summer to spend the day completing the trail when it is up and running properly. And also to try the magnificent slide in the play area ;)

Bryngarw House is set within 113 acres of parkland and amazing Country Park; yet is just five minutes from Junction 36 of the M4 motorway. I strongly suggest you stop by for a visit if you’re in this corner of Wales.