The Four, The Laundry, The Life… In Which I Am A Bona Fide Rescue Hero.

Rather a long time ago now, I began a regular column right here on LittleStuff – ‘The Four, the Laundry, The Life…‘, a weekly chunter about anything I fancied, really, your usual mumblings about life in a busy house with four children and two businesses to run. But as so often happens The Other Stuff got a bit in the way, and the column took a back seat.

However, tired of the incessant nagging from Certain People (*peers over glasses in a pointed fashion* yes, you know who you are), I’m Back.

I knew you’d be pleased.

So; new and fresh off the press, here’s the first of the 2011 come back tour of The Four, the Laundry, the Life… 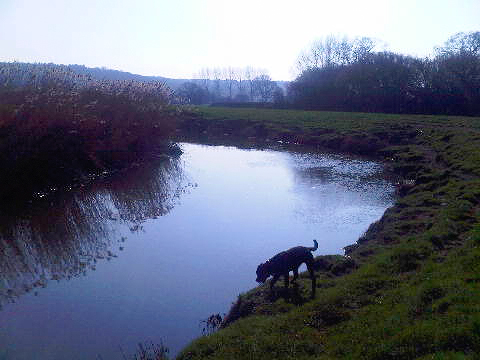 The River Stour. Scene of The Lamb Incident

Two days ago I was walking Blue (new-to-you member of The Four household – now 6mth old Rottweiler puppy. Who eats wallpaper and all manner of disgusting things.) late in the afternoon, just as it was getting on for dusk. We headed straight down to the river – only to hear enormous bellowing bleats from the opposite bank. At first I couldn’t place it, but then I saw that a small lamb had slipped down the steep bank and was perched at the edge of the river, in water up to its stomach, bleating furiously at me, clearly unable to get back up.

I stood and looked and muttered useless placatory murmurings at the poor lamb, as I checked my options. There is no one around to help, no fisherman this late in the day, and as dark is closing in fast it’s unlikely anyone else will be along now. I have no clue who owns the fields (and therefore the flock) on the opposite bank. There are no bridges across the river for a mile in either direction. I seriously considered stripping and wading across… and possibly would have done if I hadn’t had Blue with me; she’d simply follow me in and then no doubt get herself drowned.

So I had to go home. Worrying and fretting and dwelling on miserable lamb-dying-of-hypothermia type thoughts as I stumped across the fields. When I got in I spoke to C, and he calmly told me there’s nothing I could do, we didn’t know the farmer, it was just life; yes it was sad, but really not to worry.
I, being more Essex Girl than tough-trained country boy, couldn’t sleep for fretting. It was my first thought when I woke the next day, and I worried all day about the poor lamb bleating sadly, lonely, slowly dying of hypothermia in cold black muddy river waters…
Yesterday afternoon I was determined Blue patrol would absolutely not, no way, no how, go near the river – I had no intention of being haunted forever more with images of a lamb corpse I could have saved.

But then, as we ambled gently across the first fields, I realised that I really needed to know… so gritting my teeth we headed over the stile and back down to the riverbank.
As we approached all was silent, and there appeared no sign… phew…

And then we heard it.

Much weaker, much sadder, much muddier, but still there!

This time, further along the river on the opposite bank (the same side as lamb) there was a tractor rolling his fields. So Blue and I legged it (well stumbled quite fast in wellies, ‘legging it’ is a bit of an ambitious statement in the circumstances) back up the hill, over the next stile, down the hill the other side (bloody Dorset and its bloody hedgerows, what’s wrong with a nice easy-to-climb fence between fields, eh?) along the river bank, scrambled through another hedge (hurrah) and we were level with the tractor driver.

I stood on the bank of the river and waved in a polite-but-urgent fashion at the tractor driver.

He politely ignored me.

I waved in a slightly more vigorous no-i-do-mean-i-need-to-speak-to-you fashion.

He spotted me, and cheerily waved back.

So I let rip with a ferociously lunatic wave, in a don’t-you-understand-there’s-a-lamb’s-life-at-stake-here kind of way, and he stopped the tractor and approached (with some caution…).
Oh the relief when he said yes the sheep were his. So I told him! I did! I said (almost word for word) ” last-night-in-the-dark-I-saw-the-lamb-it’s-in-the-river-but-couldn’t-get-to-it-it’s-been-in-there-since-last-night-must-be-freezing-lucky-to-be-alive-still-just-by-the-cow-crossing-right-there-oh-its-still-alive-pleasecouldhecomeandrescueit?”

Slightly bemused by the onslaught I think he got the gist of what I was saying and set off down the river bank. I determinedly stumbled back through the hedge, across the field, up the hill over the stile, back down the hill and along the bank until I was opposite the lamb – just as his much more leaisurely (flat) saunter got him there at almost the same time. Was rather proud of my speed, actually. When I stopped puffing and gasping for oxygen.

So there we were, one each side of the river; I pointed him along, as he could hear the bellowing but couldn’t see it from above, and he slithered down the bank (Instant thoughts? “Oh no! Now I’m going to have to wade in and rescue the farmer instead!”) and he rescued the lamb!

Not THE lamb, just another we saw recently. That hadn't fallen into a river.

It had a dicky leg, which was obviosuly why it hadn’t been able to clamber up the bank, but with some prodding (and a bit of carrying from said farmer amid muttering  about getting soaked and mucky) he hobbled off into the rest of the flock to find its Mum.

At least 22 hours in the river for a tiny lamb – amazing huh?

I was rather proud of Lamb Rescue.