The Chicken Run – what happened when it rained…

Home » Featured » The Chicken Run – what happened when it rained…

Posted By Laura in Featured, The Chicken Run, The Four the Laundry the Life | 3 comments

Chickens don’t like the rain.
I mean, they REALLY don’t like the rain.
Actually, this should have been No. 11 in the Things I Didn’t Know About Chickens list (I suspect this list is going to continue to grow…).
It makes them moody and depressed and grumpy and shouty.
And I’m sure they do everything they can to look way more bedraggled than they actually are, just to gain a few more cabbage leaves out of sympathy.
They are properly miserable in the rain.

Chickens that live in one spot remove all the grass underfoot, and leave the run as bare earth – which is fine. They scratch about in it happily, and with their regular food bowl, and daily afternoon treats, they’re happy as… chooks. But we’ve had a pretty dry Autumn so far here in Dorset – a cover on the run has been more than enough to keep off the light showers we’ve had.

So it hadn’t really crossed our mind what would happen when the first big rain hit us.
Rookie Error no. 347.

What happens is this… 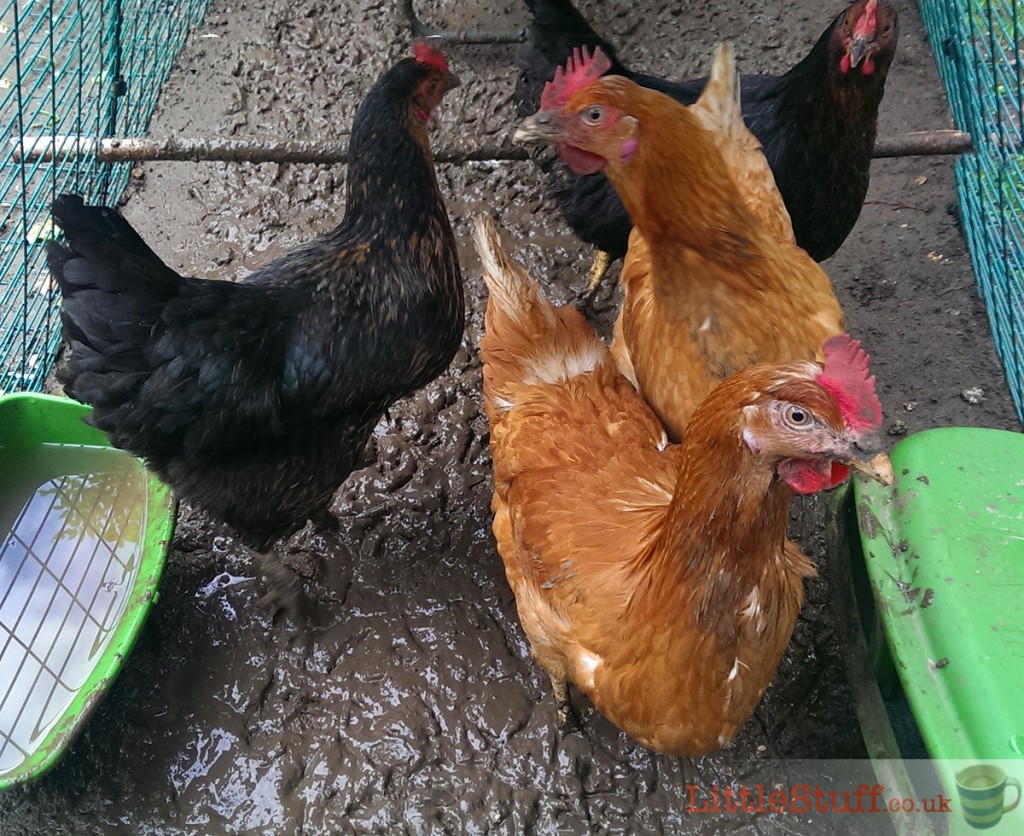 Mud soup.
That’s what.
And to be fair, I can understand their misery – just look at that picture. Possibly the first picture in which all four chickens are in focus, and why is that? Because they’re ALL giving me the stink eye.
But look at it – you can’t even see their feet for the stinky slop (and when I say stinky, ye gods I mean stinky…), and their beautiful feathers are mud-spattered and crispy.
The poor girls needed assistance fast.

I know there are lots of brilliant permanent solutions for chicken runs, but right now the chickens are not in their permanent position (we want them in a much bigger enclosure that gives them more room, and also means we can get to them without crawling on hands and knees in the stinky mud slop…). So we needed an instant quick fix solution for our poor soggy girls.

We headed out to a local farm shop, and bought a bale of straw, a large sack of wood shavings (and a small bag of grain as a little something extra to apologise for the hideous living conditions they suddenly found themselves in). 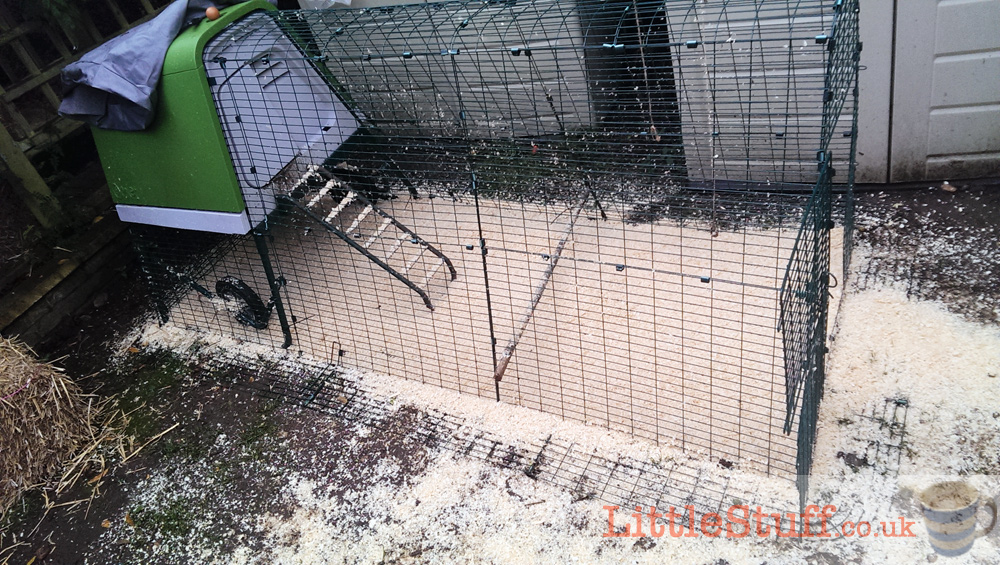 Back at Ground Slop, the first task was to get the girls in the house. This is easiest as a two-man job; the ideal time to clean the run is when they’re in the house, but unless you feel like cleaning the run at 7 in the morning (I don’t) then you just have to catch them and plop them back inside for a while.
They rather object to this.
Henghis is always up by the door (waiting for food, obvs…) and easy to catch – I nip round the back with her, Mr LittleStuff opens the back door of the coop, and in she goes. No fuss.
Usually Miss Eggsa is up next – she’s always halfway down the run, but reachable because as soon as she’s touched she calmly squats and waits for you. But now you’re leaning halfway into the coop – far far easier to get the chicken in the ‘front’ door at the top of the ladder than it is to wriggle back out with an armful of chicken.  But you can’t open that from inside the coop. So Mr Littlestuff waits until I’m poised and ready, then swings it open. Miss Eggsa has to be launched into an indignant Henghis Khan’s face and the door is swiftly closed again.
Next catch is always Oprah – she resists and scurries to the back corner of the run underneath the coop but flattens herself and awaits her doom as your hand touches her back.
The fling-chicken-into-coop-and-slam-door maneouvre is repeated again.
Last to be caught is wily Jabba the Cluck. She’s a cunning girl, and is determined to outwit me one day. No sitting and passively waiting for her – oh no, she’s determined to wriggle and run, darting one way and then the other and absolutely sure she can sneak round me if given half an inch of room. When you do catch her though, she nestles in for a cuddle quite contentedly, crooning and relaxing as you stroke her.
The final launch-a-chicken-through-a-door-into-the-indignant-face-of-three-others happens, and then we were free to sort out their icky run. Which I was now knee deep in myself, obviously.
*sigh*
First was the layer of sawdust, to soak up a lot of the water and keep their feet out of the mud. Once we had a good thick coating, we went for a nice bed of straw for them to scratch up and keep warm and dry in. 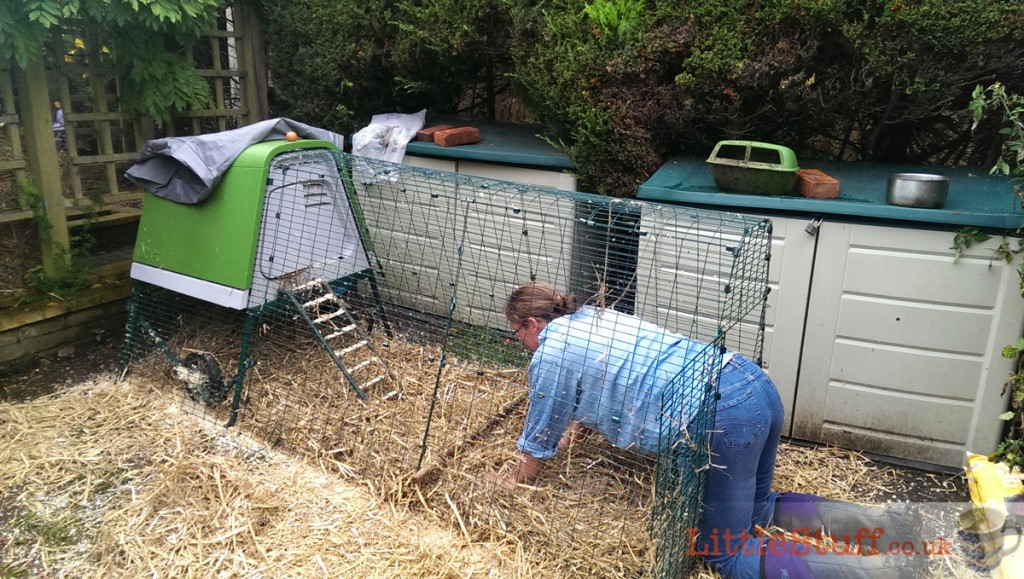 See? You have to get right inside for this. All the while the door is being pecked at in annoyed temper.
Once the straw was down I could have slept in there myself – SO thick and warm and it smelt gorgeous!
We replaced the ladder, cleaned out the water bowl, took the mud off the outside of the food bowl and topped it up, replaced the perches and scattered a handful of grain for them to scratch for.
The whole thing had the aroma of a hot dry summer – and the angry pecking had finally gone suspiciously quiet.
So I retreated back out the door, pegged them shut and Mr LittleStuff did the honours, releasing four disgruntled and suspicious ladies out into a whole new world. 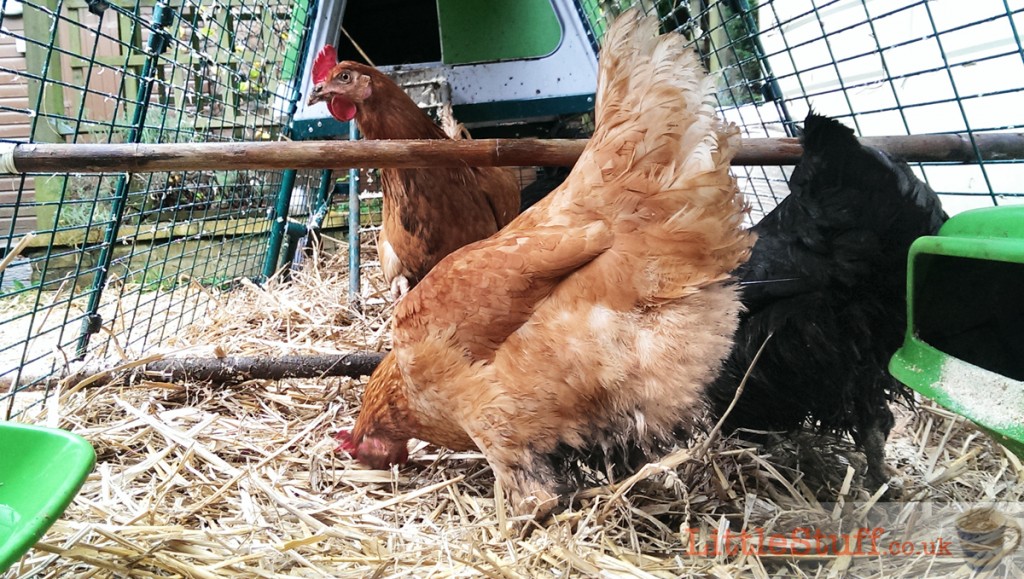 And were they happy? Oh my yes.
There is a direct correlation between a chicken’s contentment and their noise level, we have discovered (oh, look, there’s no.12 on the Things-I-Never-Knew-About-Chickens list…). Happy chickens make contented, soothingly gentle chucking noises. Disgruntled chickens make properly annoying “OI! YOU! Get down here and FIX this mess!” shouty raucous crawks every time you stick your head outside the back door…
But look at that picture. No stink eye. That’s just Henghis’ usual “wotcha got for me to eat?” face. We see that one a lot…

The Chicken Run is in conjunction with Omlet, fine purveyors of All Things Chicken. We have the Eglu Go UP coop which houses up to four birds, plus we have the 1m run extension to give them a little extra room.