The Chicken Run – Mean Girl and the Henpecked Hen

Posted By Laura in Featured, The Chicken Run | 0 comments 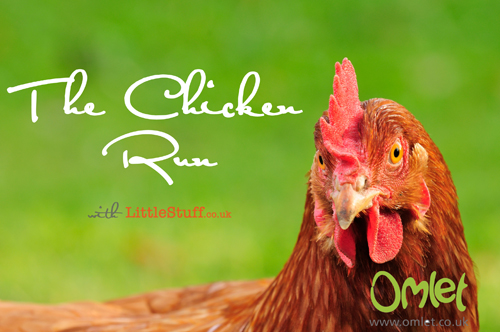 When the girls arrived with us a few weeks ago, we knew there’d be a settling in period as they adjusted to life as a sisterhood of four in their new home.
We understood they had to work out their own little pecking order, and that it would take a few days for them to shake down together.
What I didn’t know was that chickens can be Mean Girls!

The first day we watched them avidly, and personalities very quickly emerged (NB – I also didn’t know that chickens were so flipping absorbing to watch…). 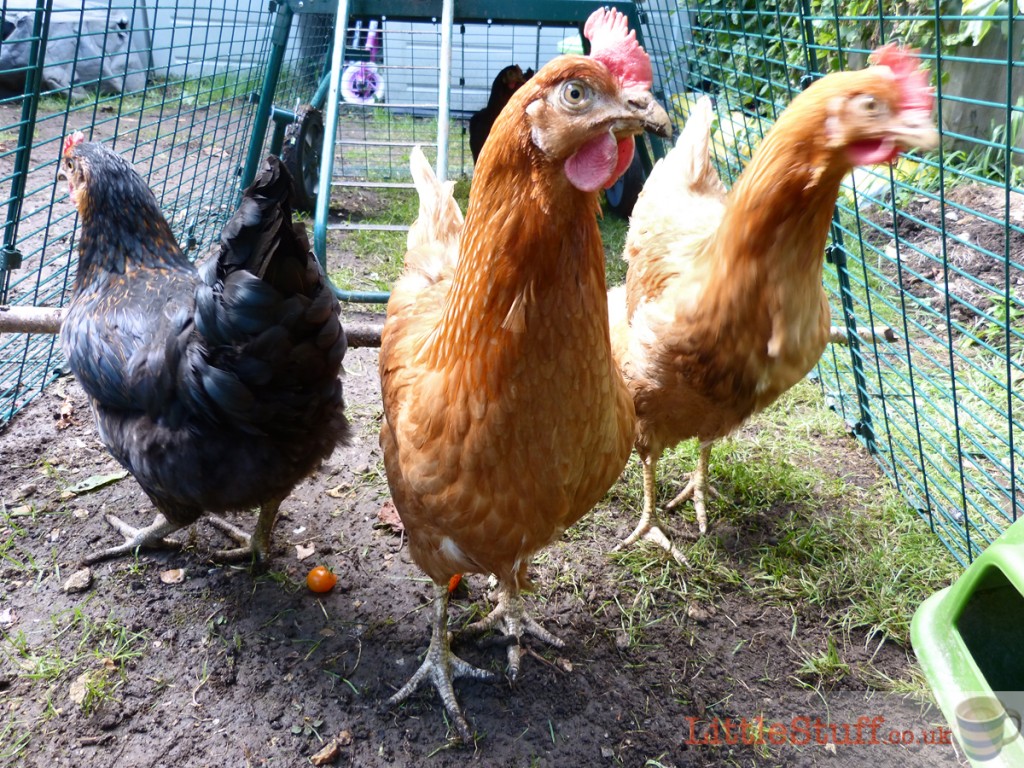 The dark ginger chook was definitely Head Girl, always up front, officiously checking everything out and demanding to be first. The paler ginger and the black-with-ginger-sprinkles seems to be mid-order hens; happy to go their own way, eyeing up the new coop, scratching away and content with their new quarters. And then there was poor little all-black hen, timid and quiet, always at the back and keeping out of everyone else’s way. In fact, quite by accident she was the first to realise what the Go UP coop‘s ladder was – Mean Girl Head Chicken pecked at her so hard she jumped in the air and found herself on top of the ladder with a nice dark private cave in front to go hide in. And that’s where she stayed.
By day two we were a bit worried – if we shooed her out into the run, Mean Girl (who was quickly aptly christened Henghis Khan) continued plucking feathers and making her squawk in dismay.
Day three, and she had a large open wound on her back which was bleeding and sore. 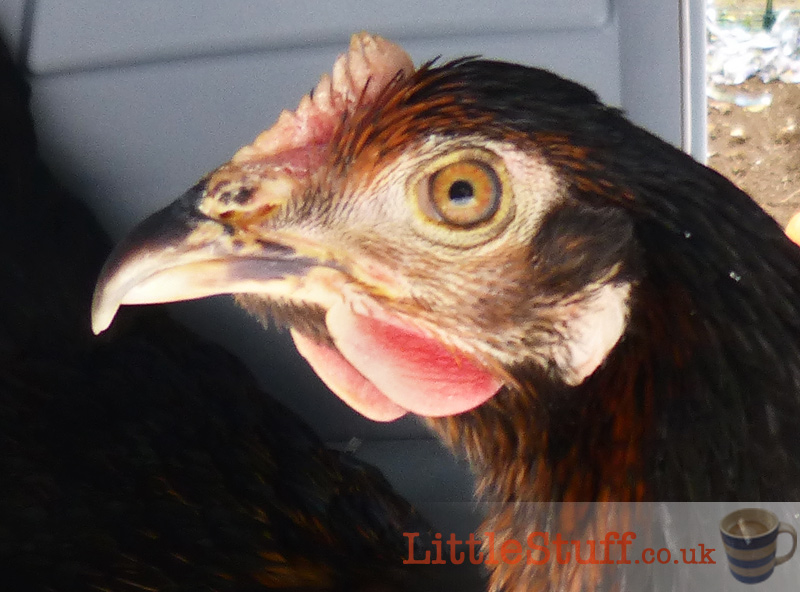 World – meet Oprah Henfrey (she’s a strong, black, independent chicken…). This is her when she was hiding inside the coop, avoiding the Mean Girls club outside.

A quick trawl of some lovely Chicken-keeping forums told me the quickest solution was to smooth the whole area with Vicks Vaporub.
I know, who knew?
Not just around the wound, but all over the sore area too – not only will it keep the mean pecking at bay, but it also helps soothe and heal the sore.
So we managed to lift poor little Oprah Henfrey (she’s a strong black independent hen, y’see…) out for some attention, and smooshed some Vicks all over her spore spot.
(the highlight of the whole episode was watching Mean Girl Henghis get a beakful of Vicks when we placed her back in the run. A few minutes of head shaking and ground-scraping with her beak hopefully taught her a thing or two about the consequences of bullying.)
The pecking stopped, and Oprah began slowly wandering the run – but still kept her distance and only approached the food & water if the others weren’t there (which was naturally the exact minute Henghis decided she right now NEEDED to eat. See? #MeanGirl ). And the Vicks wore off quite quickly – though effective, it needed reapplying daily at least, and we didn’t want to stress her further with constant handling and prodding at the sore skin.
We had a quick chat with the lovely people at Omlet, and they immediately told us we needed some Stockholm Tar. 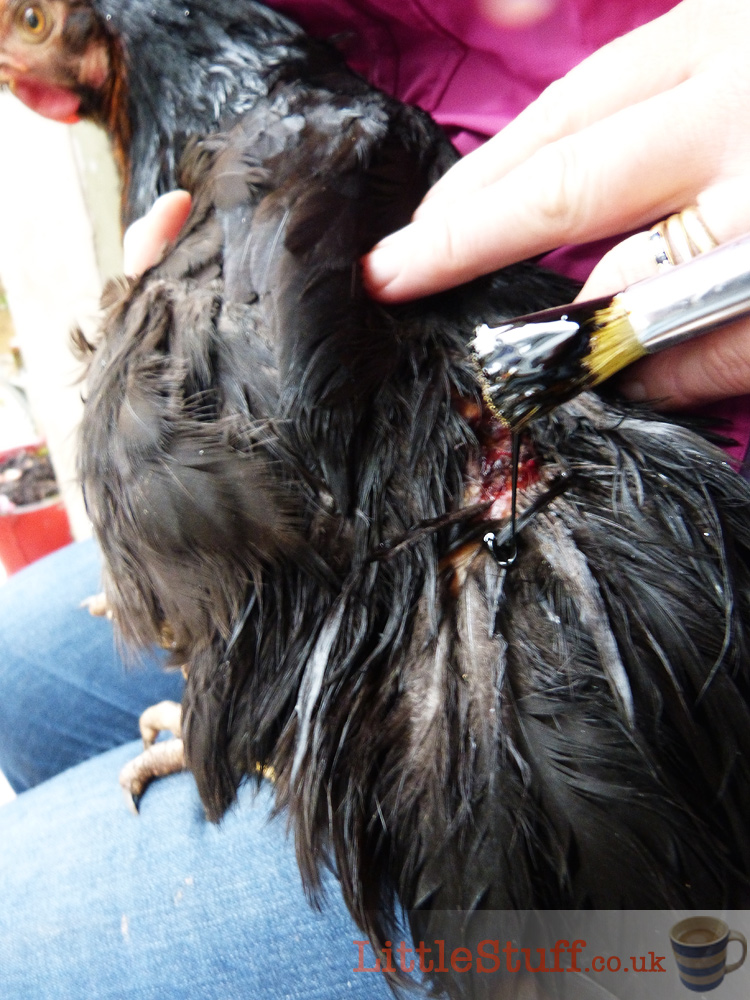 It arrived a day or so later, and as the feathers had begun to fly again, we scooped up poor little Oprah in order to paint her with the tar. Sitting her on my lap, I held her quietly whilst Mr LittleStuff applied the (sticky, stinky, runny icky nasty) tar. As he parted the feathers we could see the extent of the damage MeanGirl Henghis had inflicted – she’d not only lost feathers and broken the skin, we could see the shiny pink muscle showing through on her back, and the wound ran around under her wing and down her leg.
Horrible. Poor Oprah.
If a dog had a wound like this, it’d be rolling and groaning and you’d be whisking to the vet. But Oprah was simply quiet and cautious – Chickens are properly tough old birds.
As gently as he could, Mr LittleStuff painted the entire area with the tar – it is antiseptic, and as well as stopping the others taking mouthfuls of her flesh, it would also help her heal.
She seemed surprisingly untroubled, and was happy to be back in the run, meandering around on her own and avoiding being part of the scrum as they headed towards the days scraps – so we made sure she had extra nice bits at the other end of the run too, just for her to enjoy in peace. 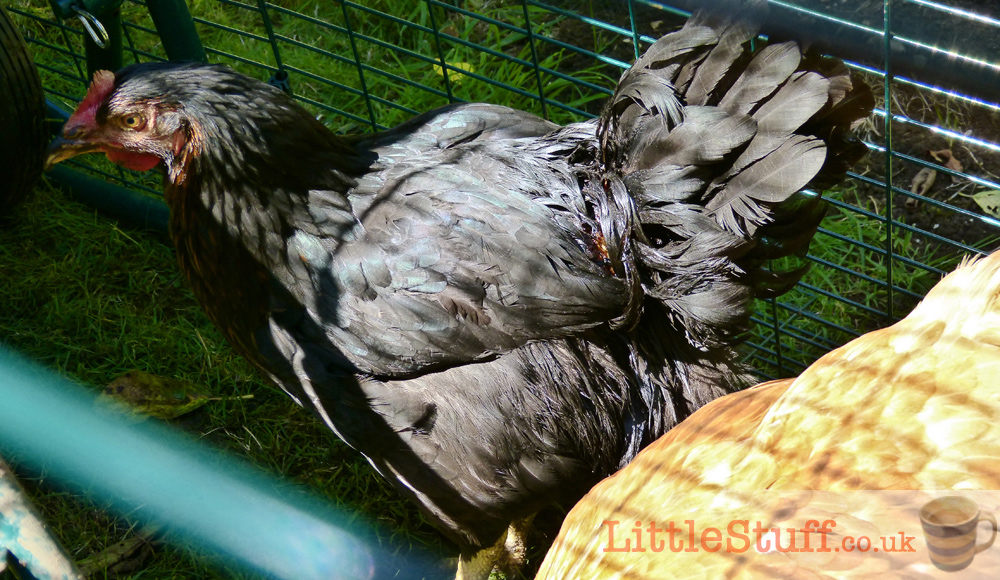 Oprah’s wounds may make her look a bit manky, but honestly: she’s healing nicely in the sunshine

A few days later we re-applied some more tar as I noticed one pained squawk from her and a flutter of wings as she jumped away from Henghis; but the wound looked cleaner and was healing suprisingly fast.
We watched her closely, and as the days went by we could see her confidence growing daily once the pecking had stopped. She wasn’t laying, obviously – a girl can’t produce eggs when her flesh is being snapped at, after all.
But the pecking ceased as soon as the tar was applied, and as she found her way in the flock her calm and sunny nature began to show itself. This girl is one chilled out chick. And she LOVES to sunbathe!
Her feathers looked terrible (the bald spot surrounded by a clump of those that funnily enough looked like they’d been dipped in tar…), but her mood brightened, and she definitely began to assert herself a little more.

She’s always last out of the coop, but instead of lurking at the back she now confidently shoulders her way in to the food bowl. She doesn’t leap for the swinging cabbage yet, but does dive in for scraps quite happily.
And today. Today. 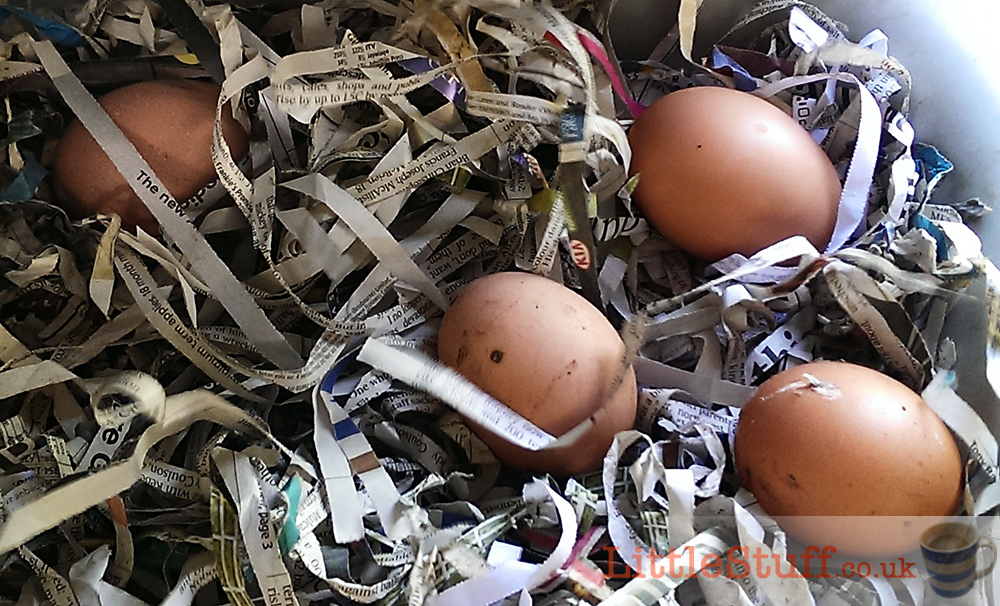 Go Oprah and your magnificent eggs! Come on, we all know the meme. Say it with me… 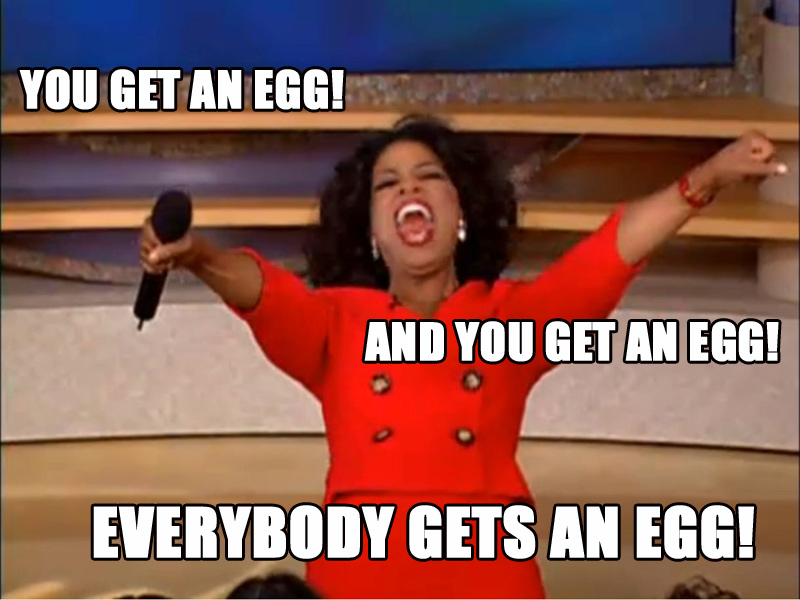 The Chicken Run is in conjunction with Omlet, who provided the Eglu Go UP coop for us, a superb hen house for up to four birds which starts at £299.