Posted By Laura in The Chicken Run | 0 comments

I don’t know about you, but I never really thought about what a chicken would eat.
When we knew the girls were coming, feeding them was one of the things that never really crossed my mind. I mean – chickens just pretty much eat anything, don’t they?
Well.. yes.. and frankly that’s occasionally the issue!

Once we had decided that they wouldn’t free range in the garden (Mr LittleStuff has spent the last twenty years making it look just like grown ups live here, with a real, proper, looked after garden. We honestly didn’t want to risk the chickens chomping on some precious delicates and flattening the borders for a dust bath. Selfish, but true). We have a large unused space which we know they’ll be happy in, so we’re all good.
But if they’re not foraging around in the undergrowth, then they’re not picking up little titbits all day. So they need a good supply of food; because chickens really don’t stop eating. 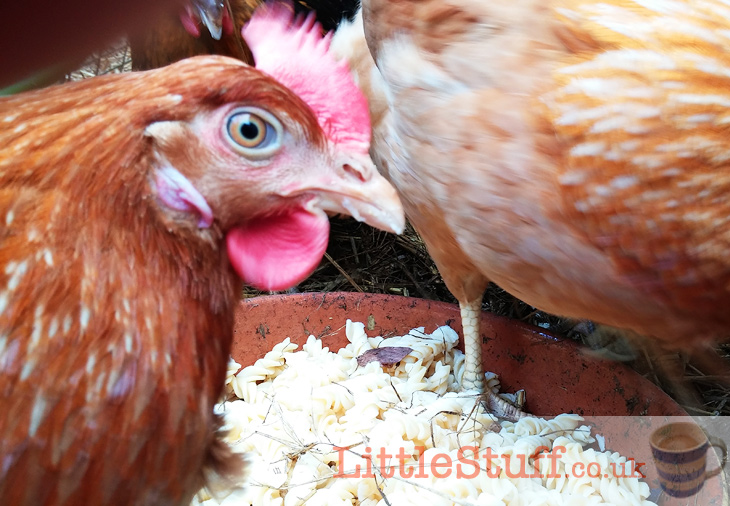 They eat all day long and store the food in their crop – part way down the food pipe, near the base of the neck. Honestly, if they’ve had a good treats day, some nights the girls go to bed looking like they’ve eaten a tennis ball.
Overnight, the crop acts like a sorting tank, smooshing the food up and separating the easy-to-digest food from the tougher stuff. This is where they need grit in their diet to help them mush the food – hens having no teeth, obviously.

But like all of us Chickens need a varied and healthy diet – they may love a bowl of pasta, but if that’s all they’re getting there;s very little in the way of nutrients in there. Egg production is going to diminish fast if they’re not eating the good stuff!

So we have the feeder for the Eglu Go in position at all times, so that they have a permanent supply of all-in-one pellets – these have everything a chook needs to keep her healthy; vitamins, minerals, protein, grit and limestone.

But as good as it is, a backyard hen still needs a varied diet beyond the little grey pellets. Some fresh greens go along way towards a happy hen – and if you haven’t got a free-ranging crew, then it’s down to you to provide it. So we ensure the food bowl is filled every morning, but by late afternoon, when we’re sure they’ve had enough of the good-for-them pellets, one of us will head down to the coop with the days treats. It might be a mash made of last nights potato peelings and plate scrapings, it might be a whole cabbage to hang from the roof, it could be an armful of dandelions we picked on the dog walk.

Of course – they’re perfect composters for all manner of kitchen scraps – they really will try and eat almost anything. And they don’t seem to mind a bowl of pasta toast with a side of mushy courgette. They don’t get anything mouldy, obviously, but gone-over veg or wilted salad is all welcomed and scoffed rapidly. They’ll polish off the left over rice that you *mean* to use up and often don’t come back to – even better if it’s a savoury rice with veggies in.
And man do they love a little warm porridge on a  chilly afternoon!

Also – if you’re digging over the veggie patch and come across a worm or two?
The girls will go bonkers.
The fastest beak gets in there and grabs it – but then she’s in trouble.
She has to run, right NOW, before anyone else gets the worm.
Which means there’s no time to stop and eat it; she’ll just race up and down with the poor dangly worm in her beak, an increasingly grumpy look on her face that she can’t actually eat the delicious morsel she won.
Then of course the others will close in, and one will manage to steal the worm.
And so the baton is passed on and hen no.2 takes off on the new leg of the relay, up and down with worm-bits dangling.
(I know, it doesn’t sound terribly amusing, but trust me. It’s worth digging up a worm for!)

The Chicken Run is in conjunction with Omlet, fine purveyors of All Things Chicken including our fabulous Eglu Go UP coop which houses up to four birds (plus we have the 1m run extension to give them a little extra room).