Posted By Laura in Family Recipes, Featured, For Teens, For the Family, The Four the Laundry the Life | 0 comments

A few weeks ago now we were asked if we’d like to try the new Pud In A Mug range. I’ll be honest – I said we’d give it a go (because, y’know. Pud. IN a mug.), but my hopes were not high. I figured this would be the sweet equivalent to an instant soup – hot, but a bit.. blah.

They arrived in their unassuming little sachets, and I stashed them in the cupboard next to the baked beans.

Where they were promptly discovered by the kitchen-prowling teens (I swear, they appeared when I turned my back for five minutes on my bundle of little boys).
Soon a noisy chorus could be heard hollering up the stairs

*much muttering and clattering in the kitchen*

“MU-u-ummmmmmm… How come they’re getting one? Can I have one? Where’s mine?“ 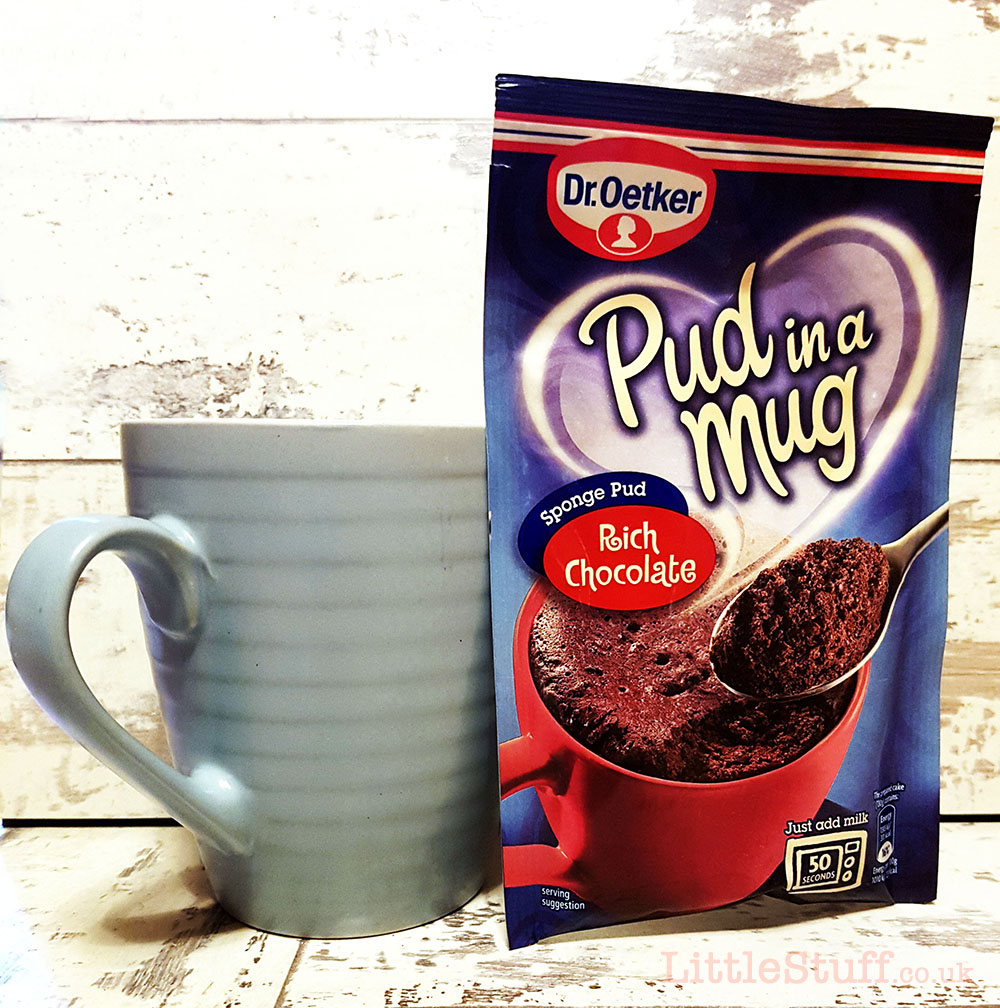 Two days later I decided to try the Pud In A Mug for the review… and they were gone.

The cupboard was bare of all traces.

So I added some more to the next supermarket order (85p a sachet, in case you’re wondering), adding ALL the flavours.

The following week, I went to try again – and lo, the Pud In A Mug was vanished. Again.

This was ridiculous – I hadn’t even seen anyone making them yet, let alone eat one.

I called a family meeting of teen boys to assess who was the Pud In A Mug glutton.

“Oh, they’re lush!”
“They’re brilliant, can you get more of the chocolate one?
“No, the sticky toffee is the nicest”
“I haven’t even tasted the sticky toffee someone nicked them all…”
“make sure you get some more, though, cos there’s only the one we left for you.”
“yeah, we left you one, like you said”

There definitely isn’t one in the cupboard.

I looked them all in the eye, waiting for the sheepish guilt, but was met by three bright-eyed enthusiastic man-children gazes instead.

Mr LittleStuff wandered past “are you talking about those Pud in a Mug things? The Sticky Toffee is lovely, especially with a splodge of creme fraiche. Can you get some more?”

Next shopping delivery I hid them.

The thing is, they’re perfect. Sometimes you need something sweet. But quick. Must be easy. But obviously has to taste good. And hopefully filling.
And the Pud In A Mug fits exactly. 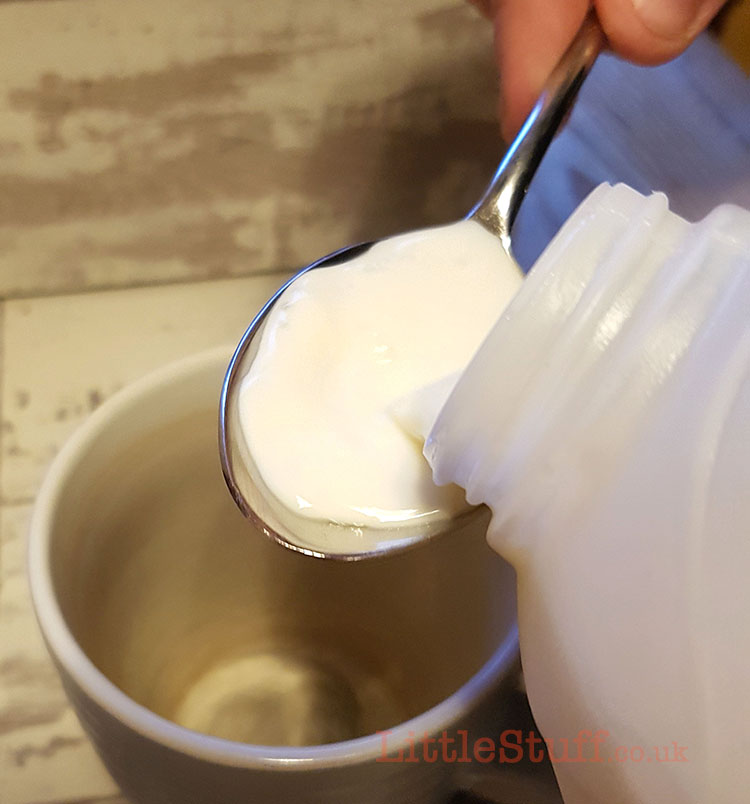 Measure 60ml semi-skimmed milk (approx. 4 tbsp) into a 250ml mug. Choice of mug is important here – we found a taller, thinner-pottery mug gave the very best results. The one pictured is a little bit thick, and needs extra nuking time. 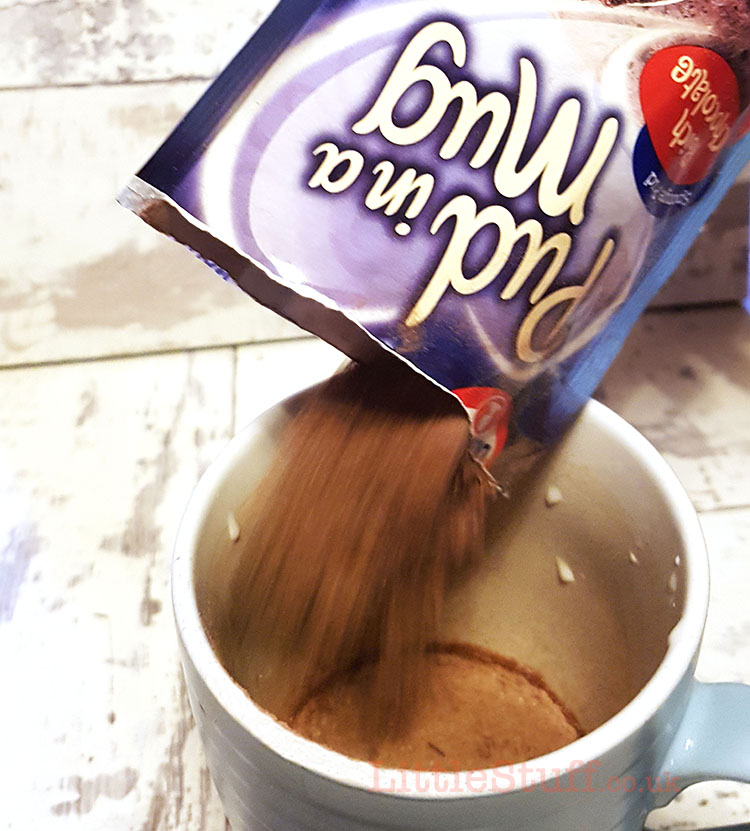 Add the sachet. I know, it’s getting complicated, right? 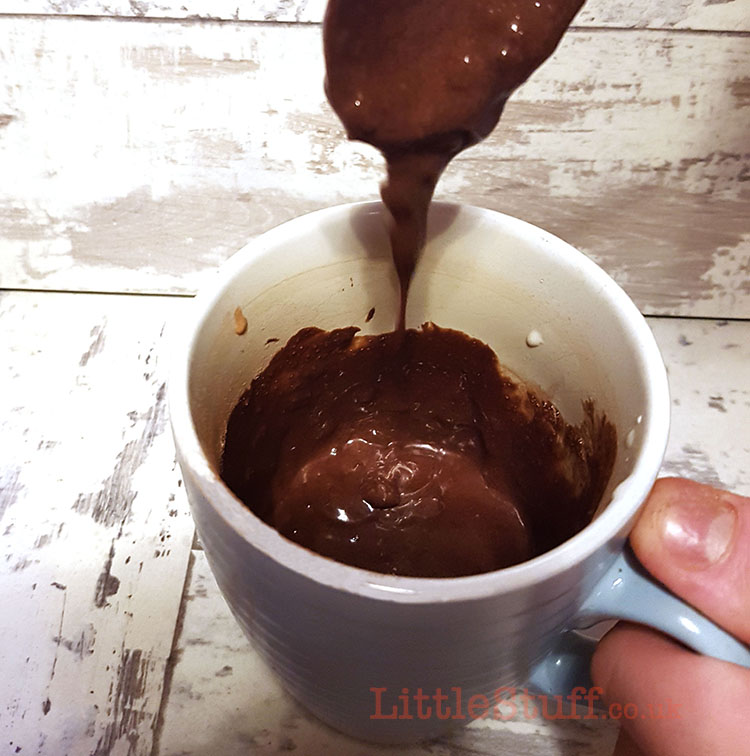 Stir it. Just make sure there’s no powdery bits, and it’s all wet and gloopy. This bit takes a good 6 seconds… 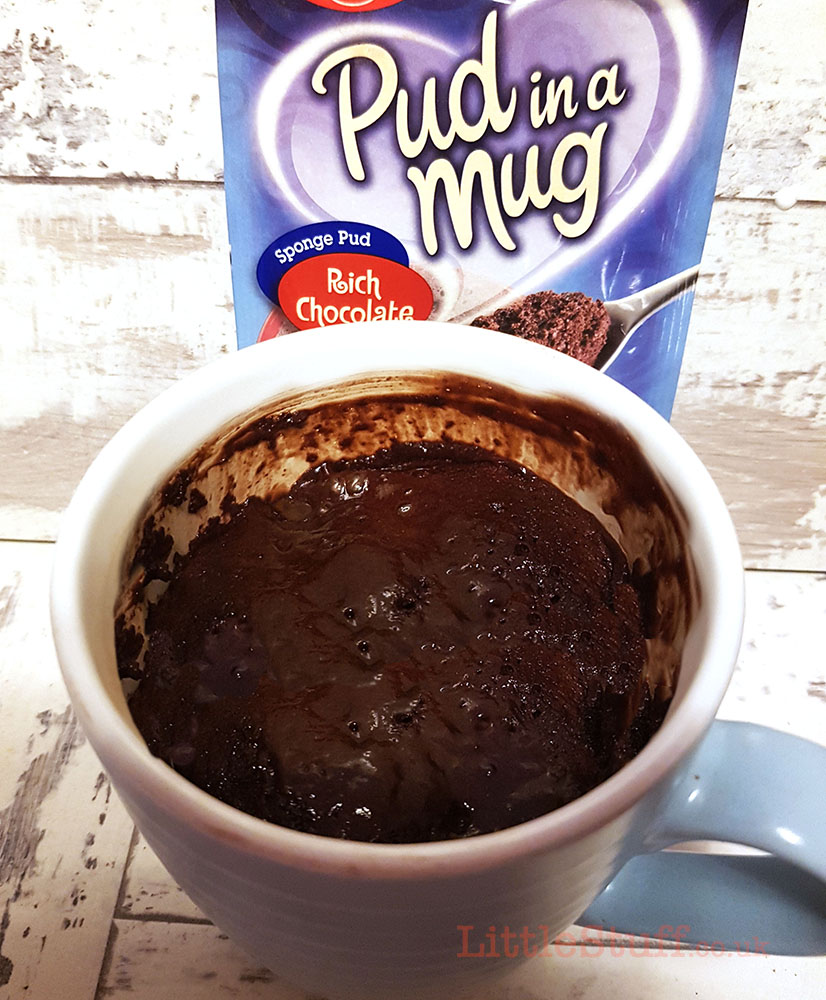 Microwave it. Each flavour is different – the rich chocolate version shown takes 50 seconds as that leaves it slightly undercooked in the middle for a soft, gloopy, chocolatey squidge at the centre. Same with Sticky Toffee, but the choc chip one takes longer, around 90 seconds I think (though of course there are now no sachets left in the cupboard for me to go and check for sure…). We’ve found the times really depend on the mug used – I like to use my perfect little cat mug which is fine bone china, and cooks to perfection in exactly the times stated on the packet. The kids aren’t allowed near my cat mug though, and make do with the chunky pottery mugs which take longer.

If you do get the right mug, you’ll have the added bonus of a totally impressive towering sponge castle when you take it out of the microwave – it deflates fast, and leaves your mug looking like a sticky mess round the edges (see pic), but it’s a grand thing to watch.

Dr Oetker’s Pud in A Mug range are available from all supermarkets – and I see they’ve added a ‘lemon’ version. OH, and two new ‘desserts’ too. Maybe I’ll just pop a few on my next order. Y’know, for research purposes… 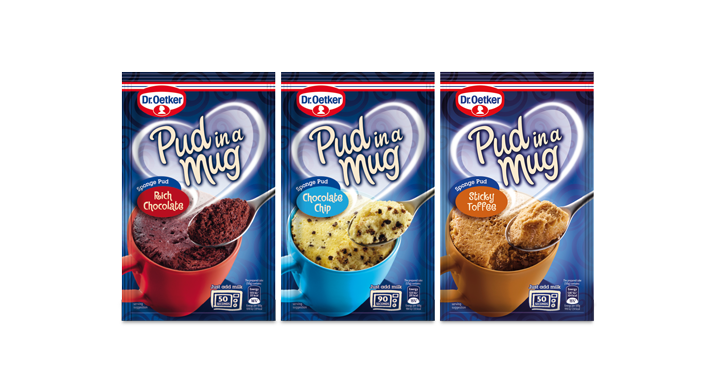