My husband is much less of a man than he used to be. Literally.

Home » Clothing » My husband is much less of a man than he used to be. Literally.

Posted By Laura in Clothing, Featured, Healthy Living, Just for You, Review | 0 comments

When you’ve been married for twenty years, it’s rather easy to become… comfortable.

You get older, your responsibilities increase with the number of mouths you’re trying to feed, the economy dips and making ends meet gets harder… thank goodness the one thing you’re not worrying about is your relationship. When you’ve been happily married for as long as we have, there’s a real danger you can get a bit smug at how easy it is.

But of course complacency can have a physical price – as can a busy, overstretched life.

So when the husband began drinking a serious amount of water before Christmas, whilst endlessly complaining of his thirst and lack of energy and exhaustion, alarm bells started ringing in my head. Because I knew, somewhere in the recesses of my brain, what those things often meant. And looking at my fast-approaching-50-yr-old man, I saw just how out of shape he had got.
In fact, I should probably use the ‘f’ word.
Fat.
That’s how he’d got.
And if I looked in the mirror, I really wasn’t far behind him in the shape stakes. 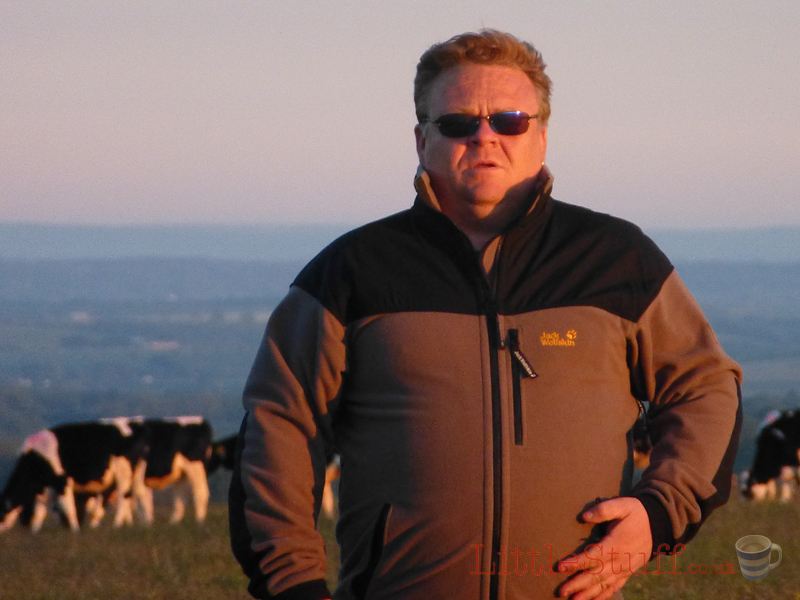 This was taken last summer, and is one of the few photos of him that I’m allowed to show you.

So early in January he headed off to the GP’s, who did a quick test… and just as we expected, he was diagnosed with Type 2 Diabetes.

Now, he hadn’t caused his Diabetes by being overweight, obviously. But that did make it happen faster.

And it was here with stomping big boots on now.

But Type 2 Diabetes isn’t actually that big a deal, is it?

The phone call from the blood labs at 11.30 on a Friday night yelping that his sugar levels were dangerously high (24.5 – healthy is between 4 and 7…), and demanding he get seen by a doctor as an emergency the following morning made us both realise how serious it possibly was.

So he did some reading, and found a lo-o-ot of information. Mostly letting him know that if he didn’t take control, this was a big deal – and potentially going to kill him.
Heart Attack, Stroke, Kidney failure, Blindness, Kidney and Nerve issues… All common complications if you don’t get it under control.

But there were a lot of people saying the same thing about fixing it – it’s not about simply taking the medicine and avoiding sugar.

It’s about lifestyle. To live the longest that he can, he needs to eat healthily, and to exercise.

So he decided that he would.

When he had his first visit with the diabetes nurse, he had another shock – having avoided the scales for years, he was horrified at the figures she wrote in his chart.

I saw the set of his jaw when he came home, and knew that his unshakeable determination to get ‘better’ had just found a goal.

And so he set to work.

He hasn’t followed any diets – determined to keep it as simple and flexible as possible, he’s simply cut out snacking, and reduced portion size – that along with menu planning for a healthy diet for the whole family has made a hugely effective and yet pretty painless result.

Once the pounds began to drop off, and the diabetic medication started to work, his energy levels began to increase.

And then he began slowly to move more. First he simply walked the dog. Then he upped that to a serious out-of-breath power walk which left the poor dog flat out and exhausted when they returned. Then he added in a daily walk into town – again power walking the hills as fast as he could.
Once that was no longer enough, he actually started using the exercise bike that that has been the world’s most expensive laundry airer for the last three years, adding a 20 minute cycling hill climb to his walking routines.

So when SportsShoes.com got in touch and asked if he’d like to review some product, he was totally made up. His old trackies and trainers were just not cutting it any more, and he needed something a little more effective.

In all honesty, the old stuff was starting to fall off him. Literally. 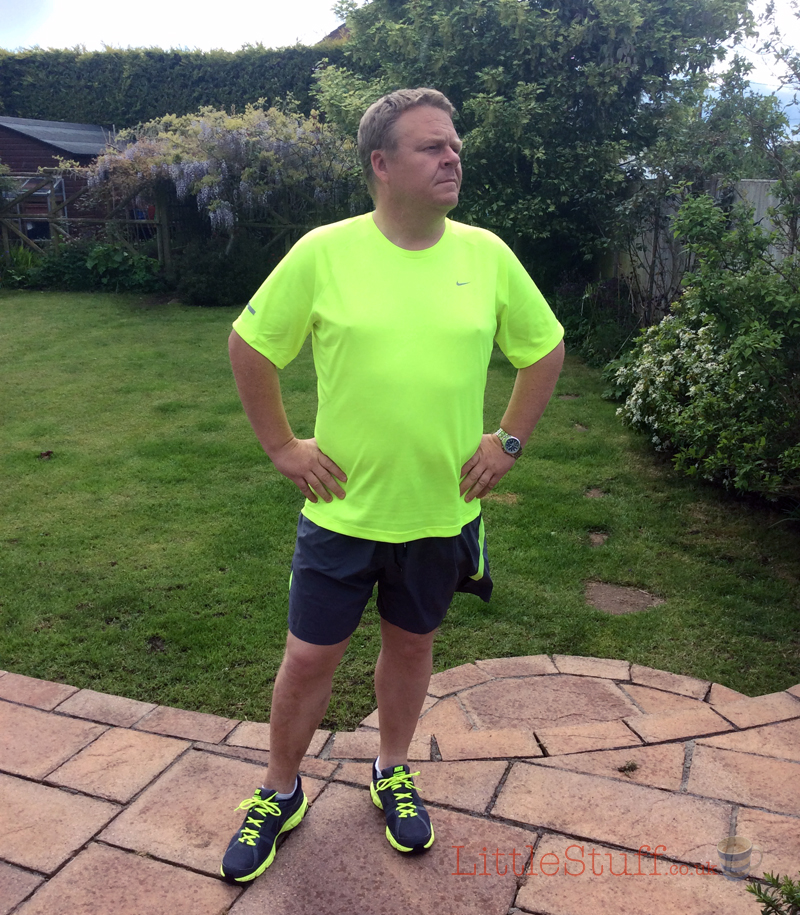 See? much less of a man than he used to be…

Because in the last four months, he’s lost 41 pounds.
That’s a hair away from THREE STONE in old money.

Which equates to 6″ off his chest – and dropping from a snug size 46″ jeans to a comfortable size 38″.

He loves the new gear – and has already been back to the really excellent SportsShoes.com for more socks and a second shirt. His selection was:

Mostly chosen because they were very very bright. Marvellous.
But they’re a great fit (at the moment…), excellent quality, and the lightweight fabric really does make a difference when you’re grunting and hollering as you make that last hill climb.

I wanted to tell you his story, and not just do a clothing review. Because I admire his drive and determination and commitment so much.
This for him has never been about the ‘body beautiful’.
It’s not about looking pretty (though he’s certainly not complaining as his muscles redefine and his abs begin to make an appearance…).
No – this is simply about living longer.
About being around for his children and his grandchildren.
It’s about enjoying a game of footie with his sons, rather than puffing and blowing and wincing at aching joints and complaining about his age taking it’s toll.
He’s re-found his bounce.
And his sugar levels? Oh, they’re down to a perfectly normal 5.4.
*high fives* 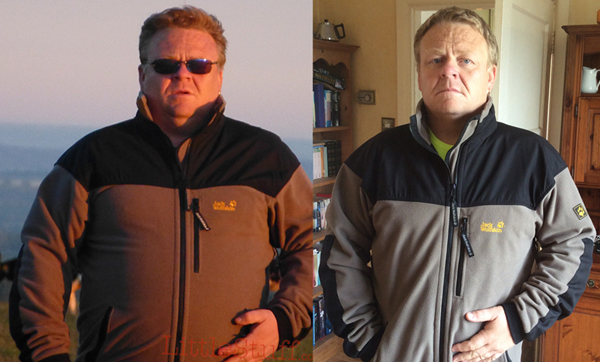 Take a look at these; as I said, the one on the left was taken last summer. I took the one on the right this morning (can you tell he was a bit busy and not in the mood for posing? He’s honestly not as grumpy as he looks), both in the same jacket. Look at how much ROOM there is in his favourite walking jacket now!

(He’s also shamed me into action, of course. Doing it together is not only easier, but it’s more fun. I’m not nearly so committed to the exercise as he is, which is why he deserved the stonking new outfit from SportsShoes, not me. But I’ve managed to shave two inches from my waistline in the last month myself, which is not so bad, is it?)