Looking for food at Old Trafford? Let us introduce you to Cafe Football.

Home » Eating out » Looking for food at Old Trafford? Let us introduce you to Cafe Football.

Lat weekend we were headed for our first ever stay in Manchester. I’ll admit, I was pretty excited – not only was it a kids-free night out, but also my first ever football match (we were going to see the SoccerAid match). We were travelling up from Dorset on the Sunday of the match, so knowing time would be tight we decided the best thing would be to drop our bags at the hotel, and head straight for food at Old Trafford.
With that in mind, I most gladly agreed to review Cafe Football, the brainchild of ex-Man Utd players Gary Neville and Ryan Giggs. It’s on the ground floor of their Hotel Football (definitely worth considering if you’re up for a match or a cricket game, but book early; they were fully booked when we tried 3 weeks before our match!), and as you’d probably expect, the footie theme runs deep.

But – does the food stand up to the name and the location? 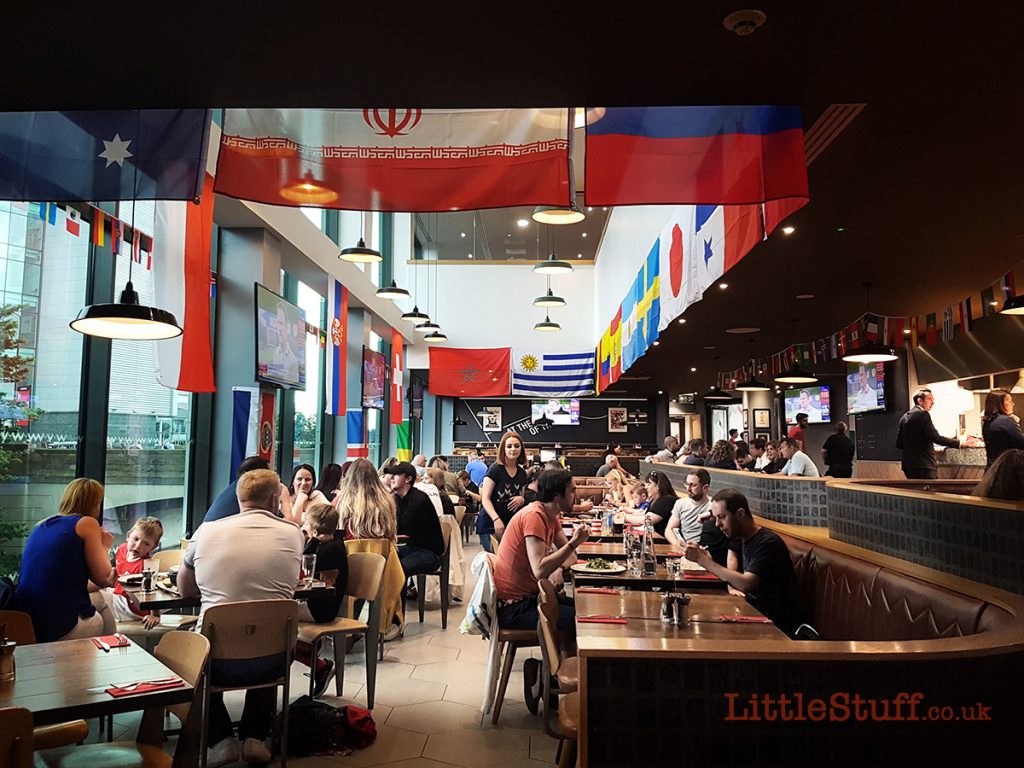 Inside, I’ll admit it – I was pleasantly surprised. It was match day, and I honestly expected it be heaving with rather loud football fans. But no – it was busy, but filled with families, a large birthday group was u[ at one end, there were lots of couples… the atmosphere was lively enough to allow easy conversation, but not so loud as to be oppressive. It was warm and friendly, and we relaxed immediately (and Mr LittleStuff couldn’t resist regular peeks at the cricket showing on the screens scattered across the restaurant).

But how close is it to Old Trafford, I hear you cry?

Well… this was the view from our table; 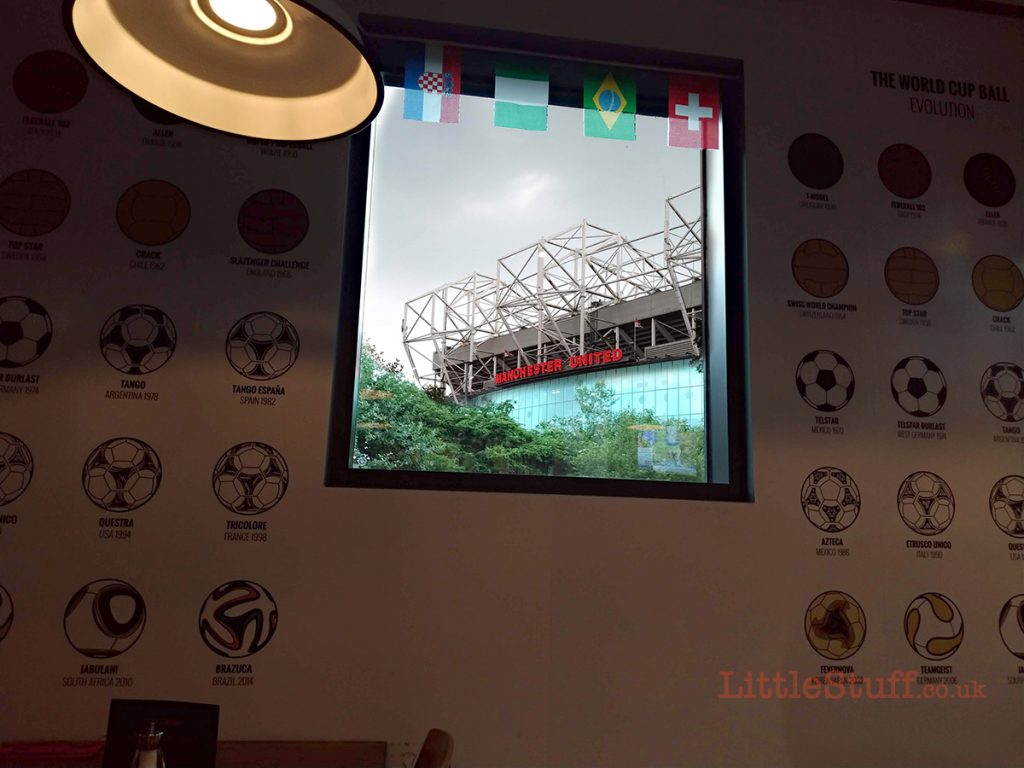 The menu naturally carries on the football theme (they claim it’s ‘subtle’ on their about page. It’s not. It’s joyously and unashamedly ham-fisted with it’s footie puns, and we loved them for it). There are sections for burgers and pizzas, and then traditional staples such as Giggsy’s (sausage, mash & gravy), Cuppa soup and a sandwich (which is not a cuppa soup at all, obviously!) or Pies. There’s also a surprising ‘Eat Like A Pro’ section, full of healthy, protein-rich or clean-eating options for the athletes among us. 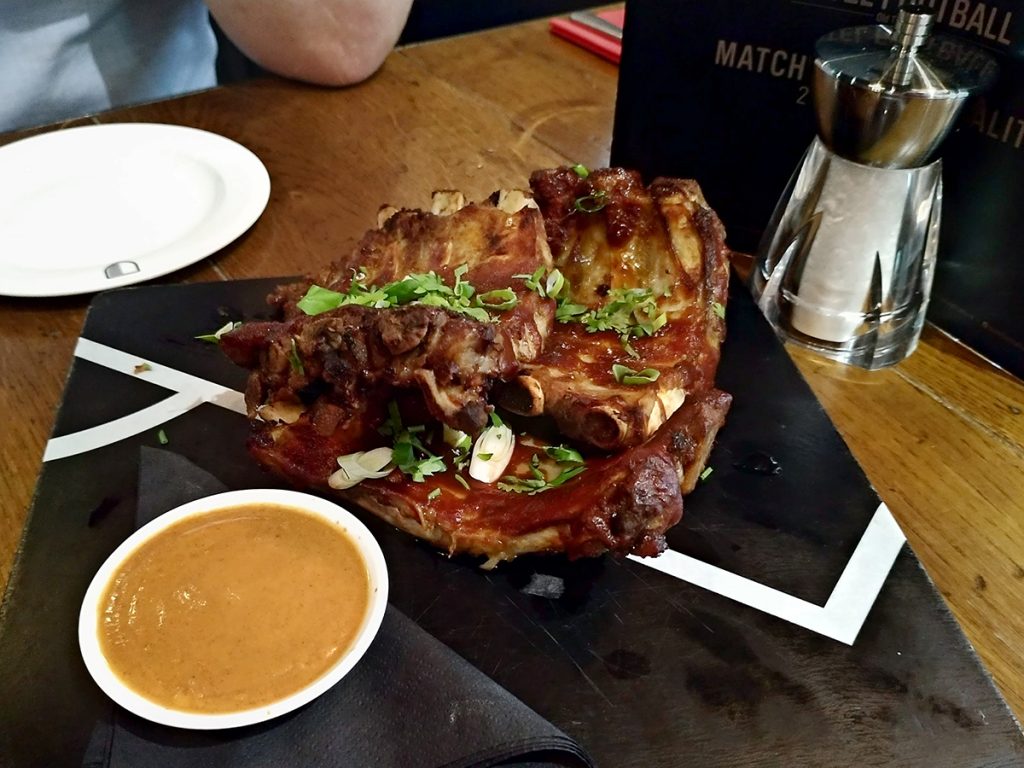 We opted to start by sharing some ribs – served with a spicy BBQ sauce, spring onion and coriander (£12 to share, £7 single portion). The sticky glossy ribs were meaty and fell apart in our hands, and the sauce was sweetly smokily tart with fresh tomato. More than enough as a starter, and as we licked our fingers and we admitted we were surprised at how good it was.
I really really tried to be healthy. I did. But I just didn’t have the will power to resist the burgers.
I oh-so-nearly opted for The Special One (£14); chargrilled chicken piri piri, red onion, Memphis crème, baby gem and goat’s cheese. Sounds amazing, yes?
In the end, though, I did manage to choose a burger with no bun – so that was sort of win, right? Never mind that it was wrapped in bacon and stuffed with blue cheese… We broke our cardinal Restaurant Rule* and we both chose the ’66 (£15) – Beef burger stuffed with stilton wrapped in streaky bacon, with mushrooms, peppercorn sauce, watercress and rocket salad. And a bag of skin-on fries – cut ‘real’ potatoes, not from a bag in the freezer (for most of us that’s the first hint of a decent chef in charge of the kitchen, yes?!).

Oh my goodness it was SO so good. The mushroom peppercorn sauce I could have ladles up with a spoon, the burger was dense and rich and melty in the mouth, the stilton added a bit of creamy tang without overpowering. I honestly slowed down and savoured every single bite. 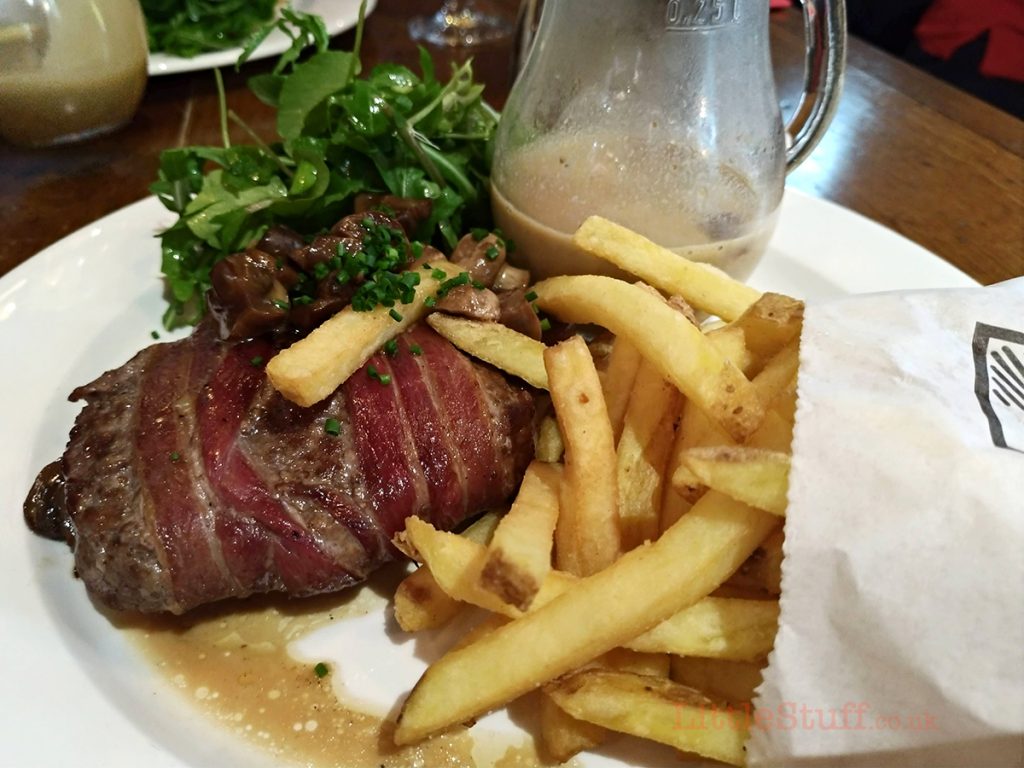 Seriously, what was going on? This was a themed restaurant dreamed up by celebby types. Surely it should be offering an over priced, dumbed-down menu filled with easy crowd-pleasers when accompanied by three pints of beer? Instead, Cafe Football has real chefs serving up creative and delicious high-quality dishes. Yes, this is a burger – but come on.

This is not fast food.

The inspiration for the restaurant was ‘…good, honest food which brings people together, whether in the stands or at home. We took this idea of wholesome food and turned it into something a bit special. Cafe Football is a unique restaurant that feeds a love of food and football.’

And yes, they’re so right.

I saw northerners cooing in satisfaction over their fabulous fish and chips. I saw kids digging in to pizza bigger than their heads.  The couple next to us exclaimed at the deliciousness off their beef and gravy pie. All simple dishes, all made with excellent ingredients, and with a creative flair that edged them way above what you were expecting when you walk in.

My dessert was Sticky Toffee Pudding – it’s always a risk as I hate a heavy pudding, but sticky toffee done right is light and airy and just perfectly sweet. And this was a good one.

The restaurant was very busy, and service wasn’t as fast as it could have been – but was unfailingly polite and cheery, and with a swift apology for any lack of speed. The staff were obviously working hard to keep up, and it wasn’t so slow it was a problem – really nothing more than I’d expect from a restaurant this close to a stadium on match day.

Would we return? Without a doubt – in fact we fully intend to. Only next time we’re going to be more organised, and book a stay in the hotel as well – if it’s as good as the restaurant, we can’t go wrong. If you’re in Manchester, then head out there for a meal – even if you’re not a footie fan, you’ll love it for the food.
If you’re going on match day, you must book ahead – there are staff on the door, and only those with a booking will be allowed in (and they’re likely to be fully booked weeks ahead)

* – always order different so you can taste each others. It makes sense, right? It’s hard to choose Just One Food from a good menu – so if you both order something different, you can try each others and see if you got it right. Win-win.