Introducing Blue the Calamity – the family rottweiler who just gets… broken.

Home » #New! » Introducing Blue the Calamity – the family rottweiler who just gets… broken.

Posted By Laura in #New!, Just for You | 0 comments 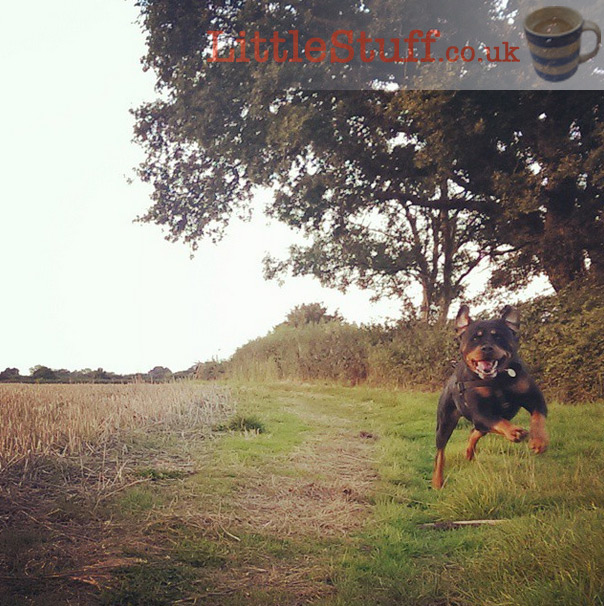 As regular readers (and Instagram followers) will know, our dog Blue is as much a part of our family as anybody’s dog is. I suppose, being a rottweiler, she’s considered by most people to be a huge dog – living with her you forget, and just see everyone else’s dogs as a bit on the small side… Thankfully she’s a huge character to match – a laid-back clown who bumbles through her days with the same laughing tomfoolery.

But actually? Amongst all the joy she’s been a lee-e-etle bit high maintenance. 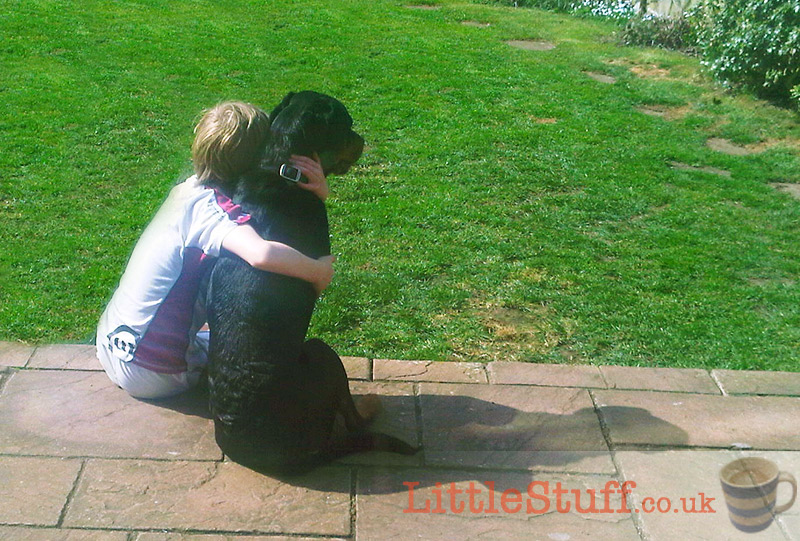 This is the boy who was terrified of dogs when Blue arrived in the house. She soon won him round… #BestFriends

Having always previously take on rescue dogs, Blue is our first pedigree – we knew we wanted a rottweiler, and with four young children we felt it was the best option for us to have one with only the bad habits we gave it.

And as a family pet she has been amazing; loving, patient and kind. She’s always up for a game, and the first to come for a hug when someone is hurt. Like any doting dog  owner, I could wax on about her endearing traits; her habit of bustling up and greeting every single member of the family the minute they get up every morning with a nuzzle and a lean.
Her tendency to sleep on her back, snoring like a dwarf with a cold.
Her inability to tolerate her nails being cut without emanating a constant, tearful howling. 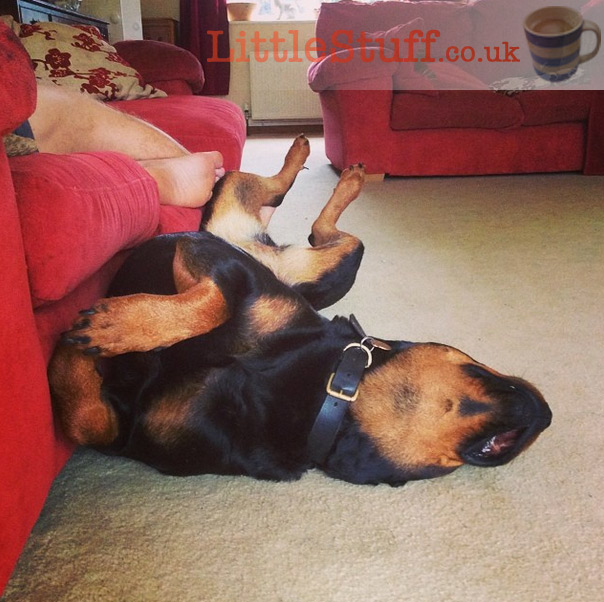 In fact, it’s probably her simple galumphing enthusiasm as she bounds through life that endears her to everyone she meets.

But it’s also that which has caused her all manner of problems.

And she really has had more than her fair sure.

She always sat in a funny manner  we thought it was an amusing characteristic of her laid-back personality that she didn’t ‘sit!’ when commanded – she usually lolled, elegantly couching sideways on her haunches with one hind leg stretching out straight.

Turned out within 6mths that it wasn’t laziness – it was an issue with the cruciate ligament in her knee. She spent an enormous amount of her first year not going anywhere as we first tried resting, and then when that failed she had major knee surgery as a TPLO was performed to fix the problem and insert a metal plate in her leg. The three months on bed rest following the op with a 12mth old puppy was enormous amounts of fun… 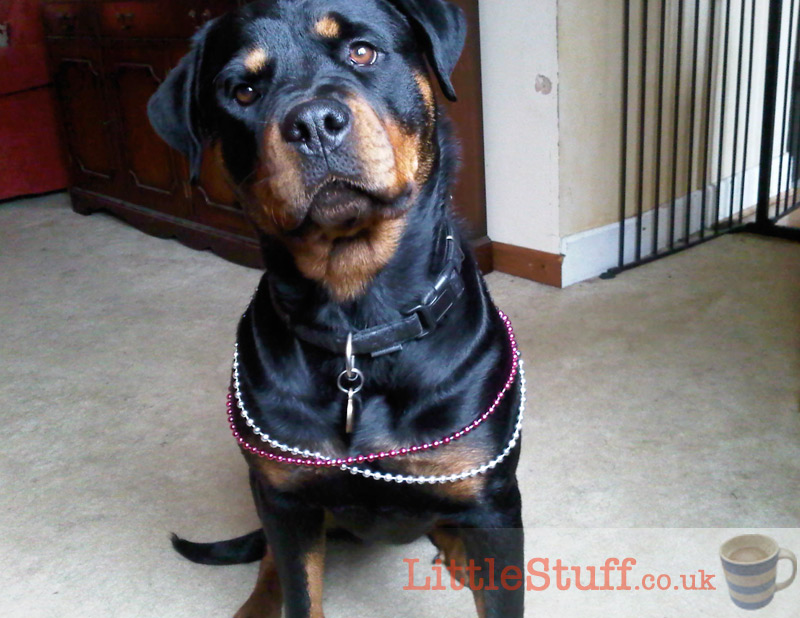 Recovery felt slow (hindered by that bloody enthusiasm – keeping her to the strict no-exercise regime was like trying to keep a small cheerful hurricane on a short lead and telling it not to bounce), but with truly excellent care from the specialists and physiotherapy team at  Southern Counties Vets (I have to give them a mention, they were simply brilliant) she actually was back to better than her younger self in no time. We had thought she was lazy not jumping in and out of the 4×4 – turns out she simply couldn’t until her knee was fixed.

But 6mths down the line she was still limping… Back to the hospital, more exploratory surgery… and it turned out that the TPLO had been a huge success and was working perfectly. But, Blue being Blue, she had calcification around her ankle joints. On the same leg (and all the others too).

She simply has to live with this – there’s no real cure, just more surgery if her quality of life becomes affected. It’s not so bad – if she walks too far, or on stony or hard ground for too long, her legs ache, and she needs anti-inflammatory medicine the way we’d take an ibuprofen after a hard day’s gardening. 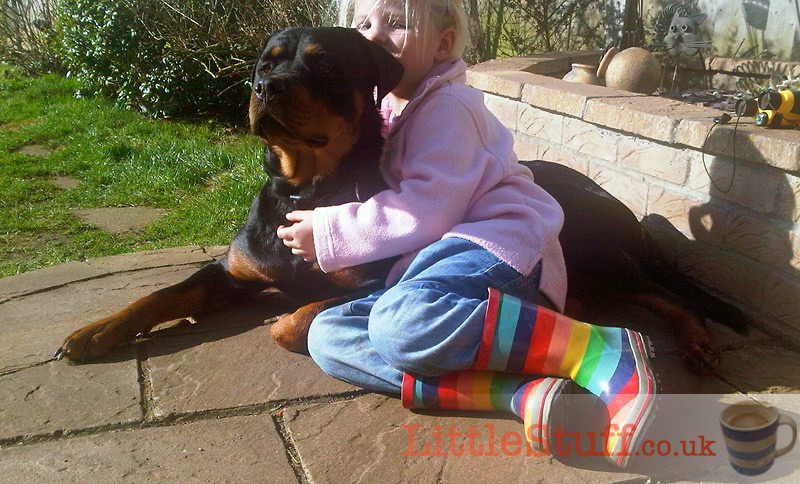 Often seen around the house. Bear and Blue, with full on innocent faces – and usually up to no good.

But alongside the two major operations life hasn’t been plain sailing either.

Oh no – this is Blue we’re talking about here. 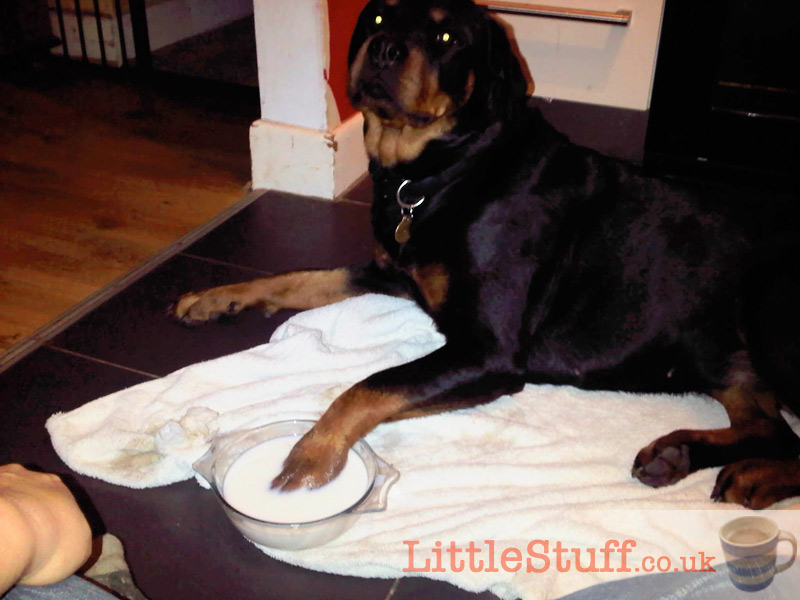 We’ve had a seriously infected, swollen and oozing foot caused by a pine needle inserting itself upwards between two pads.
We’ve had kennel cough.
We’ve had a ripped ear on barbed wire fencing (she just kept running after the stick, she never even slowed down or yelped as it tore like a piece of fabric. Ick.)
We’ve had a stomach bug to end all stomach bugs. Projectile vomiting and diarrhoea (all over my cream carpet. And I do mean ALL over it – we were out for a few hours. We came home to the sickest, sorriest, saddest dog ever – and fifteen different impossible-to-remove stains in one room (not to mention those I cleaned from the walls and the thankfully-tiled kitchen floor). And no, home contents insurance doesn’t cover for pet stomach bug damage).
We’ve had a pulled ligament in the front leg (slipped as she was running scared of a combine harvester. A parked, turned off, dark and empty combine harvester, mind…). 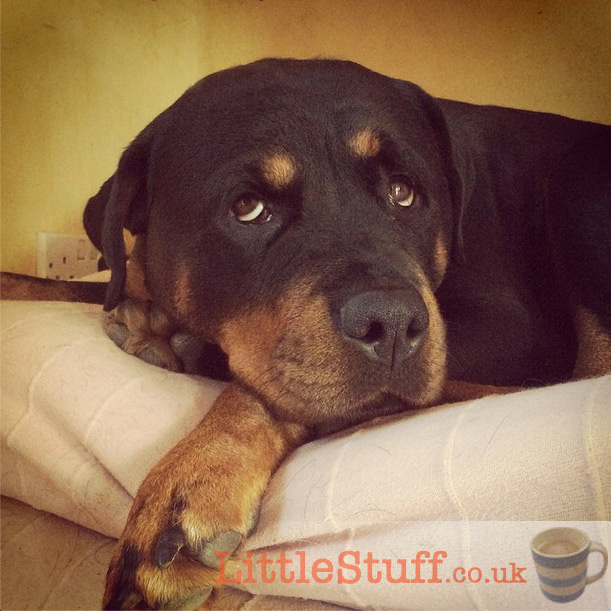 Woe was Blue. The saddest face you ever saw for the biggest tummy bug in the history of dogkind.

Oh, life’s never dull with Blue around.
All I can say is thank goodness we have some rather brilliant pet insurance. She’s not quite 4 yet. We still potentially have another 6 years of this…