Inside out with Subway Kids’ Pak ™

Posted By Laura in #New!, Eating out, Out and About, Review | 0 comments

Last weekend the three youngest and myself went on a small adventure, courtesy of Subway. We left Dorset and headed off to that there Londinium, because Subway thought we might like to try out their new Inside Out Kids’ Pak ™ before watching the film itself (because Subway have teamed up with Disney Pixar to offer their smallest customers an Inside Out themed Kids’ Pak ™).

We’re already huge fans of Subway – they’re genuinely always our first choice for a quick pitstop if we’re out shopping. So we didn’t need much persuading, to be honest; a Leicester Square screening of Inside Out was just a pretty cool way to get our attention :)

And the new Inside Out  Kids’ Pak ™? Properly awesome. 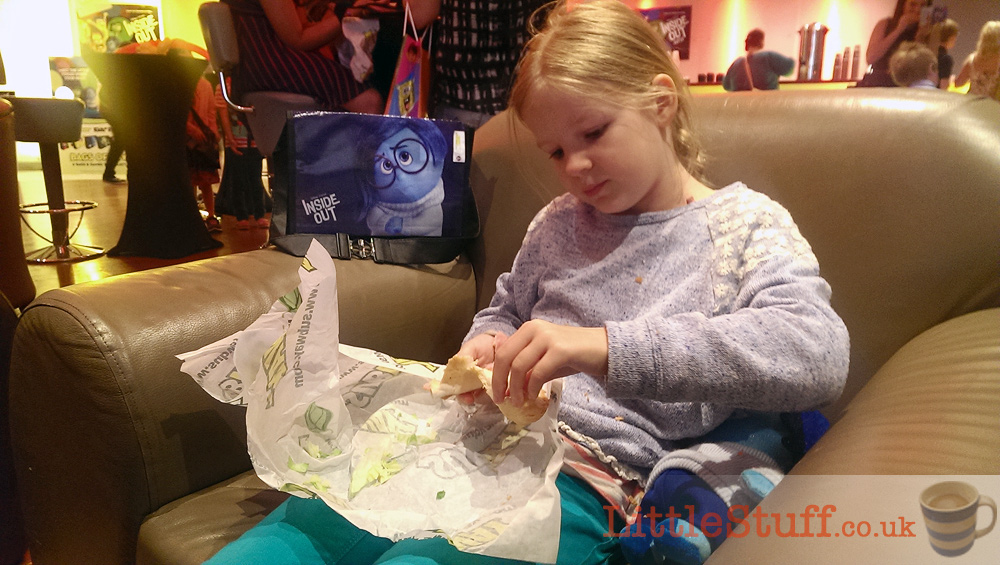 The contents are the same as the already-fab Subway Kids’ Pak™ – your child can choose from a range of 4-inch Subs, and have it made exactly as they like it (unlike our pre-made samples at the screening, which as you can see Bear pulled weary eye-rolling faces at as she pulled out AAaaaLLLL the lettuce… ), with a Capri Sun Fruit Crush or water and BEAR Pure Fruit Yoyos.

You may have spotted that Disney had sent Bear a Sadness toy this week, who she felt it was right and proper to bring along to the screening. When she asked for a ham lunch, it was presented to her in that Sadness bag that she has propped neatly on the arm of her chair. She was thrilled, and felt that Sadness was clearly ‘her‘ character. She’s 8, and this lovely bag (filled with lovely lunch) had her now-favourite character on it (even though we hadn’t actually yet seen the film). Obviously she instantly fell in love with that bag, and immediately put it on once she’d finished eating. She was wearing it when we went into the cinema, but by the time we were back on the Underground I realised she was no longer wearing it. There was nothing in it, it wasn’t a big loss, and her big brothers immediately gifted her their own Angry bags in its place. But she has taken ownership of Sadness the character, and was very sad that she’d left her own bag behind. Her brothers saw the irony in this, and found it mildly amusing.
Bear didn’t.
Which may have made us all laugh a bit more… 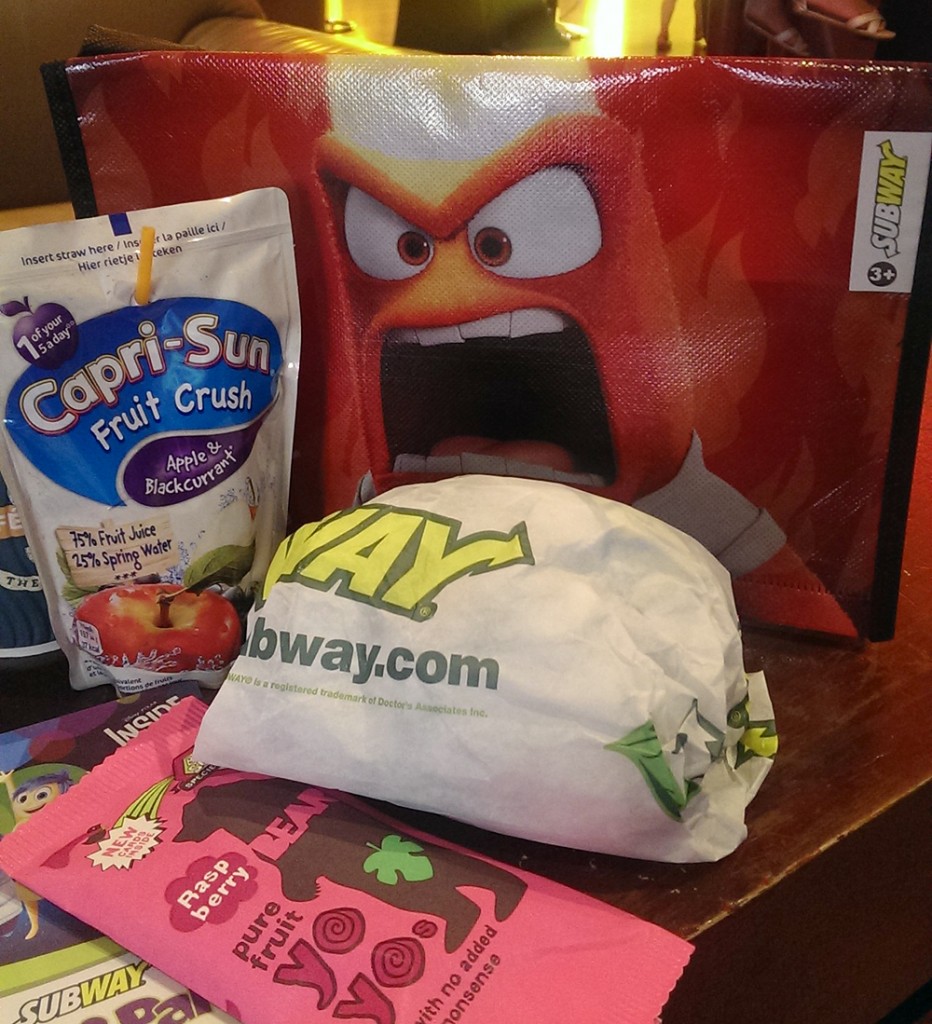 Clearly the bestie best thing about the new Kids’ Pak™ is the bag. For sure.
There’s a game of Inside Out themed ‘pairs’ inside the bag, but the bag itself is brilliant – even the too-cool-for-anything 14yr old didn’t leave his Angry bag behind, and insisted I tuck it in my handbag for him (what? He wasn’t actually going to carry it in public…).

Oh, and the film? Inside Out is Properly Brilliant. We all laughed out loud, and I might’ve cried. Twice. Definitely a must-see this summer.

At £2.99 the Subway Kids’ Pak™ are definitely a brilliant lunch stop for your small people – great value, and a flexible healthy choice. Also, I now want ALL the bags. Plus, obviously, an extra Sadness bag for Bear…