Following the amazing madness of a day absorbing the scale of both Pompeii and Vesuvias we decided to take a day on Dei Pini’s lovely beach to relax and enjoy. We swam with the fish, we read on the sand, I caught up with some work… And Boy got nipped by a crab. Twice.
But we had many miles still to go, and couldn’t stay still for ever.
We have quickly fallen into the swing of living in a motorhome. There is so little space that everyone is naturally tidier (anything left on the floor will simply get trodden on), and the children are far more aware of the chores going on around them, learning quickly to notice when water bottles need refilling, when there’s drying up to be done, and most important of all what the whistling kettle means.
We’ve also learned our limitations, and what looked like a completely doable 6hr drive from the comfort of the UK we knew would simply be a stretch too far, making a pleasurable journey into an arduous, exhausting exercise.
So we had a quick change of plan, and opted to leave Dei Pini a day early, heading up the coast for just three hours to stop at Ostia. That would leave us enough time for exploring the ruins and squeeze another experience into the trip before moving in again to our stop near Pisa.
Arriving at Camping Internazionale Castelfusano just after midday we were able to park up, grab some lunch, then head straight out to the bus stop.
Being Italy, the bus was ten minutes late obviously, but it’s just a couple of stops to the metro station ( which is less than an hour into Rome), and then a few stops on the train to the station nearest Scavi Ostia Antica.
A five minute stroll found us once again in the midst of a ruined Roman town, and we took to exploring. There was something about Ostia Antica which we all especially loved. Rome had beaten us about the head with its shouting antiquity, Paestum had been silent and more ancient than we could grasp, and Pompeii had been stunning, yet sobering. 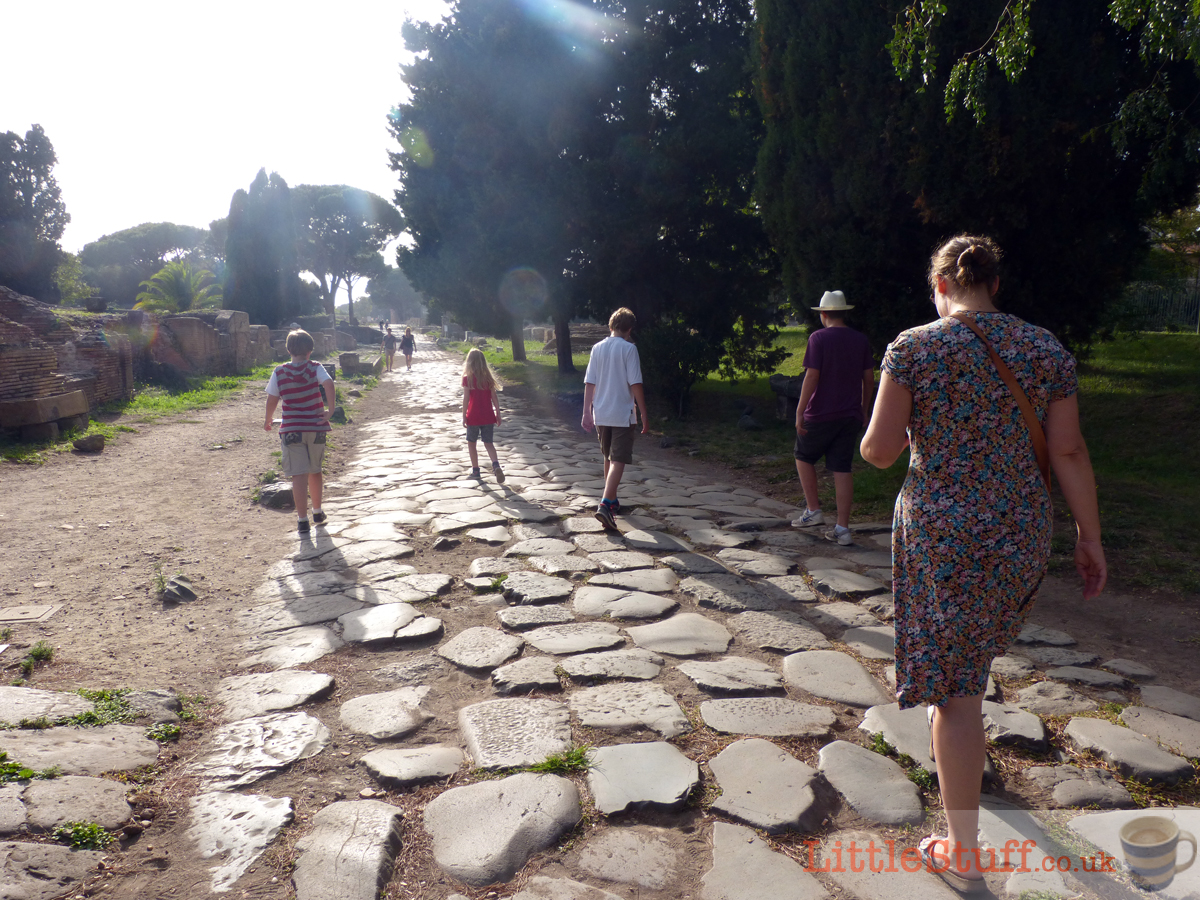 Walking down the Decumanus Maximus at Ostia Antica – Rome Italy

Ostia felt… Relaxed. Comfortable. The children scrambled and explored. They grasped the street layouts, they ran up steps that a thousand Roman feet had trodden before them, calling out of upstairs windows and pretending to sell wine and fish in the shops. For the first time they were free to properly explore and scramble where they wanted – and they loved that. 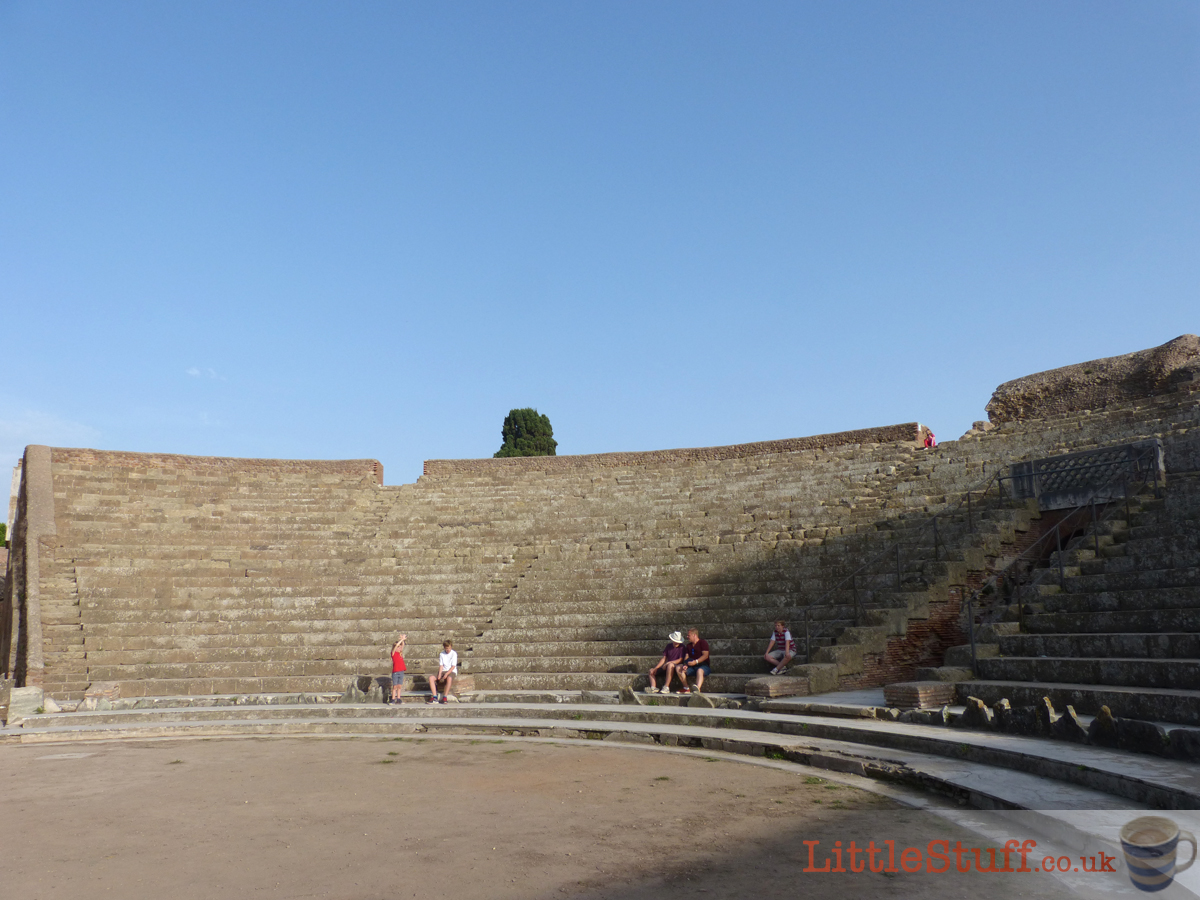 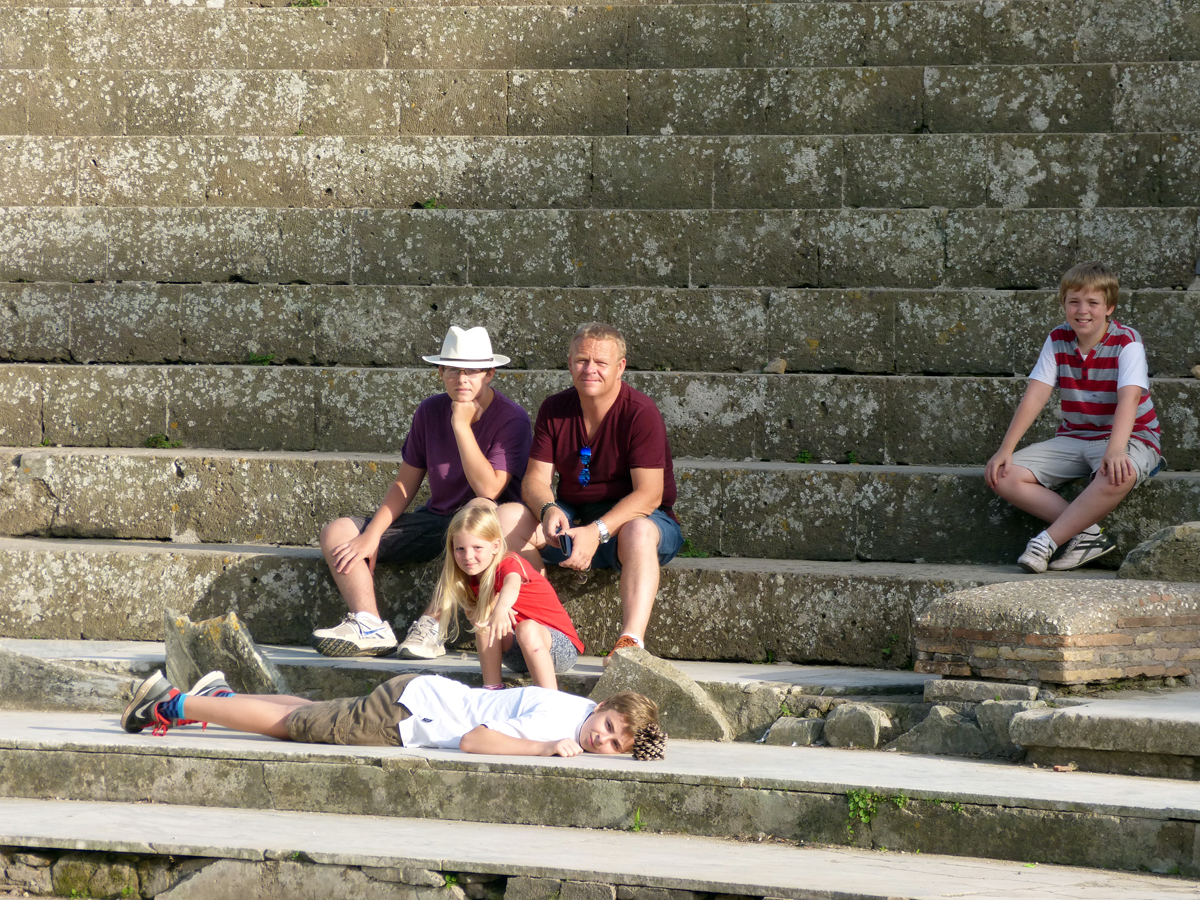 The theatre was beautiful, and the mosaics from the baths were being restored, which was fascinating to watch. We arrived mid-afternoon, and practically had the place to ourselves, strolling down the Decumanus Maximus and dipping into the side streets, back alleys and market squares as we wished. We managed to download the pdf guide to the husband’s phone which meant the information we wanted was at our fingertips, but mostly we stretched our legs and simply felt the town grow around us. 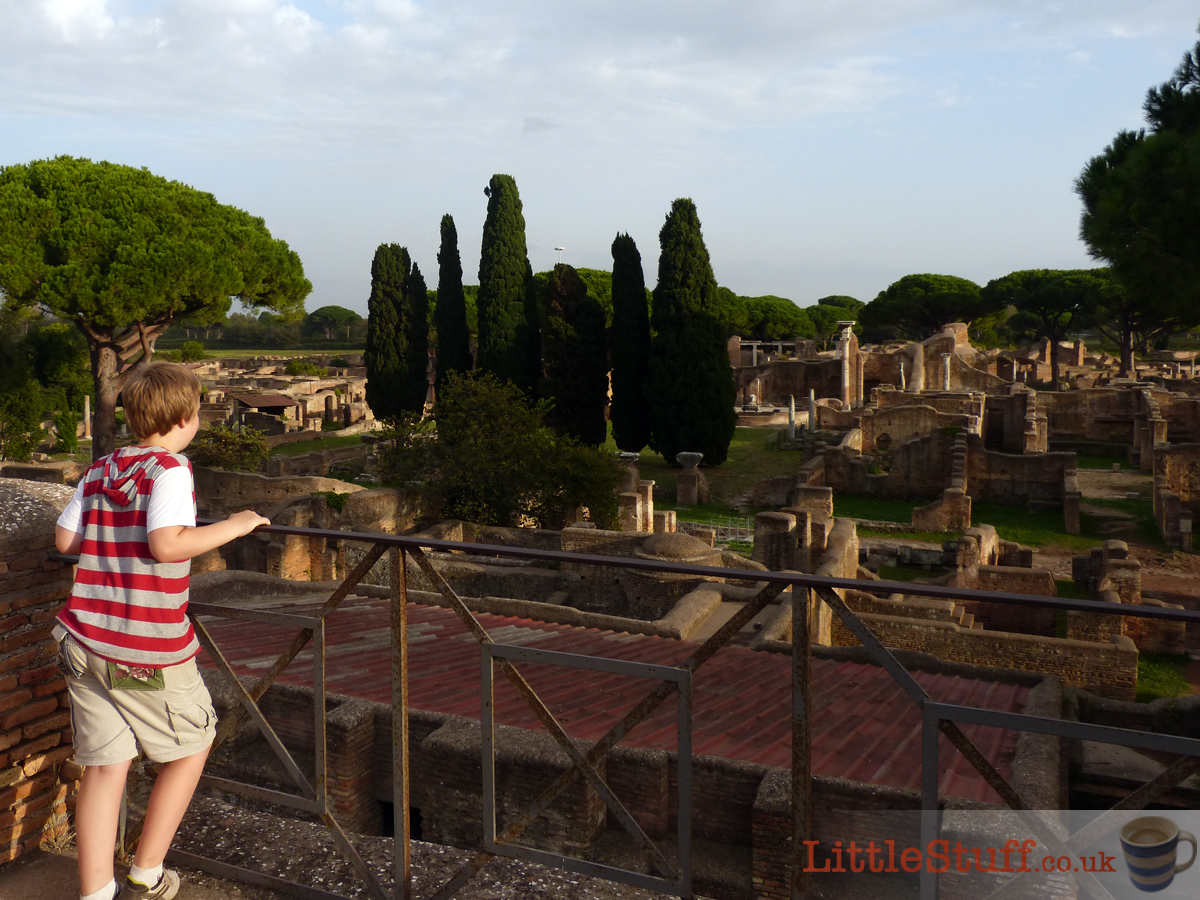 Marvelling at the view across Ostia Antica – Rome Italy 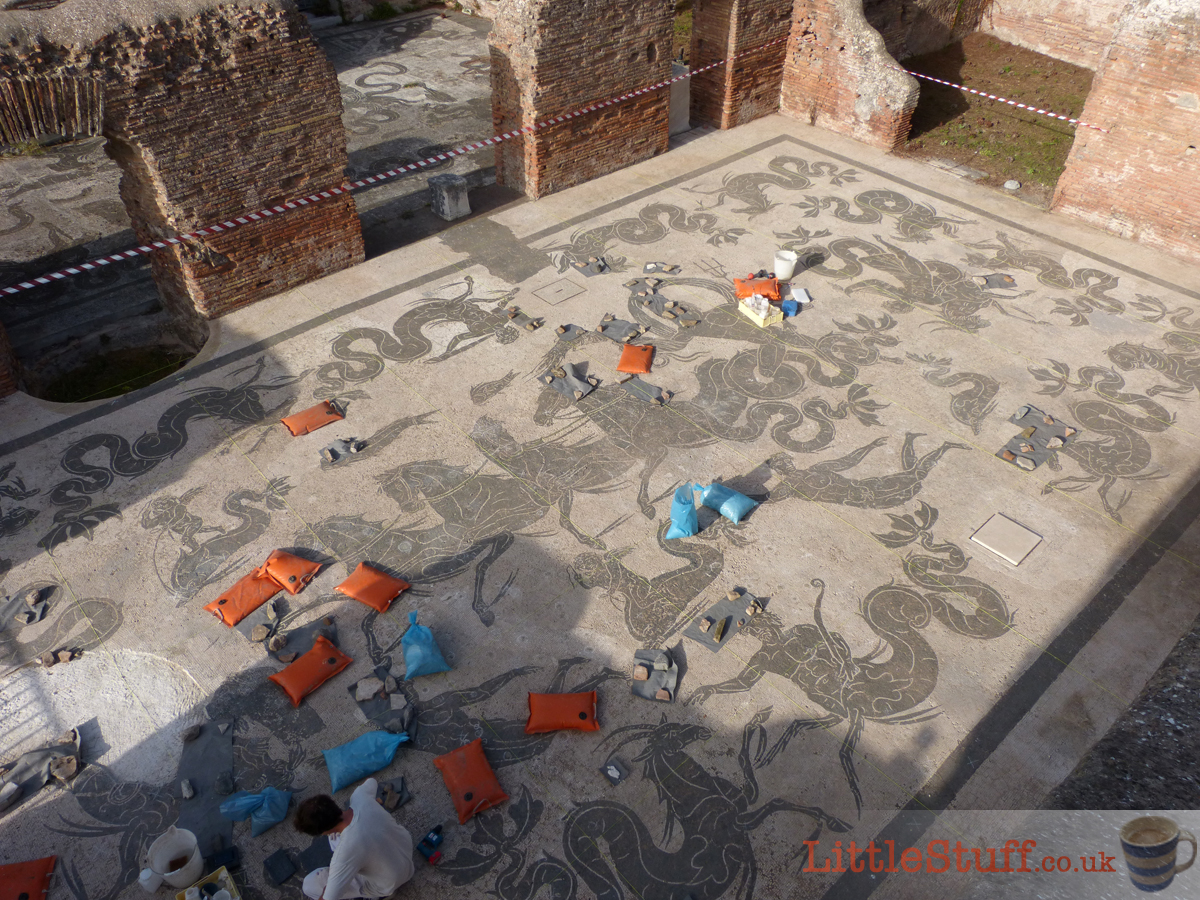 Arriving back at the campsite tired and satisfied we had dinner and got to bed in good time, ready for an early start onwards to Pisa in the morning. Sadly, about the same time we packed up, the lodge opposite which was inhabited by a large group of teen boys decided it was time to come out and play. Their numbers grew as more campsite residents joined them, and a ful scale party was going on by 11p.m.
We sighed in exasperation, but felt they’d pack up soon. Almost all sites we’ve ever stayed at have a no-noise policy between midnight and 7 in the morning, but when we thought about it we had seen no sign of this in reception, so we guessed there would be no policing of the noise level.
However, the reception staff would surely have known there were a large proportion of parties of young teens staying  in the lodges – it might have been nice if they had tipped us off of this fact, and maybe suggested we stayed elsewhere on the site; as it was quiet and there were plenty of available pitches.
By 1.30 in the morning I was seething, taking photos out of the door with my phone of the bloody inconsiderate group shrieking, laughing, chanting and clapping just 15′ away, keeping my children awake. I’m not sure if I should be more impressed at their stamina, or the fact that they kept walking to the glass recycling bin (the other side of the hedge outside our bedroom window) to drop their bottles in with a pleasant smash.
At 3 in the morning I was restraining the husband from going outside and slapping some heads together – not because I cared about their heads, just that I thought it would no doubt result in more noise and maybe a few thrown bottles.
The last of the party finally died away just before 5 in the morning, and we managed to get a couple of hours sleep before the alarm blurped at us at 7.30.
The boys’ early morning toilet trips were made rather unsavoury by the stench of vomit in the boys toilets.
We left quickly, five of us in foul moods (the oldest teen had slept through the whole thing) and I’m fairly certain we’ll not be revisiting that particular site. Onward and upwards to Pisa then!

Margot is an Approach Autograph 765, and was provided by Bailey of Bristol for the trip.