Sauntering along the now-quiet street, feet slightly aching, I watched my two youngest tip their faces skywards, glowing in the light from the beautiful angels flying over them. Hanging on to their Dads hands, eyes still wide and trying to take it all in, I honestly wondered why we’d not done this for years. We were all tired, of course, but it had been one of those days which I just knew would feature in the ‘d’you remember…’ family dinner conversations for years.
We’d come up to London for a quick Christmas city break – we had just 24hrs as guests of the Heart of London Business Alliance, and we were determined to show our Dorset-born youngest two the joys of London at Christmas by squeezing in as much as possible. 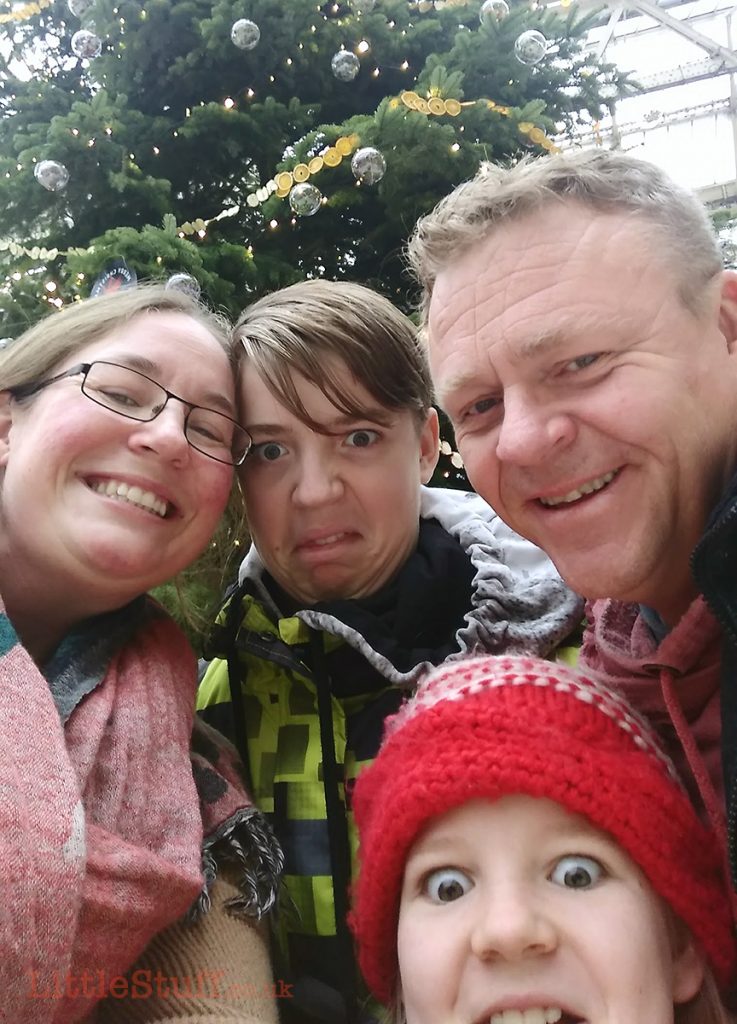 We arrived on the train after an early start, and headed straight to our hotel (the Premier Inn on Leicester Square) to drop our bags so that we were free to explore. Then we stepped out into the hub of the busiest tourist area of one of the world’s busiest cities, and simply followed our feet! We had theatre tickets for the evening, so we decided it would be a good idea to collect those straight away to avoid queuing before the show itself (if you don’t have anything pre-booked, I strongly suggest you make your own first stop the TKTS box office in Leicester Square to grab yourself a last-minute bargain on one of the best shows. You simply can’t come to the West End and not see a show, okay?),
Tickets neatly tucked into Mr LittleStuff’s pocket (he’s far more trustworthy with valuable items than me), we set off. The order of the day was shopping – the west end is obviously awash with some iconic stores, and we wanted to take Jolly & Bar into as many as we could. We started close – and the LEGO Store seemed the perfect choice to kick the day off right. 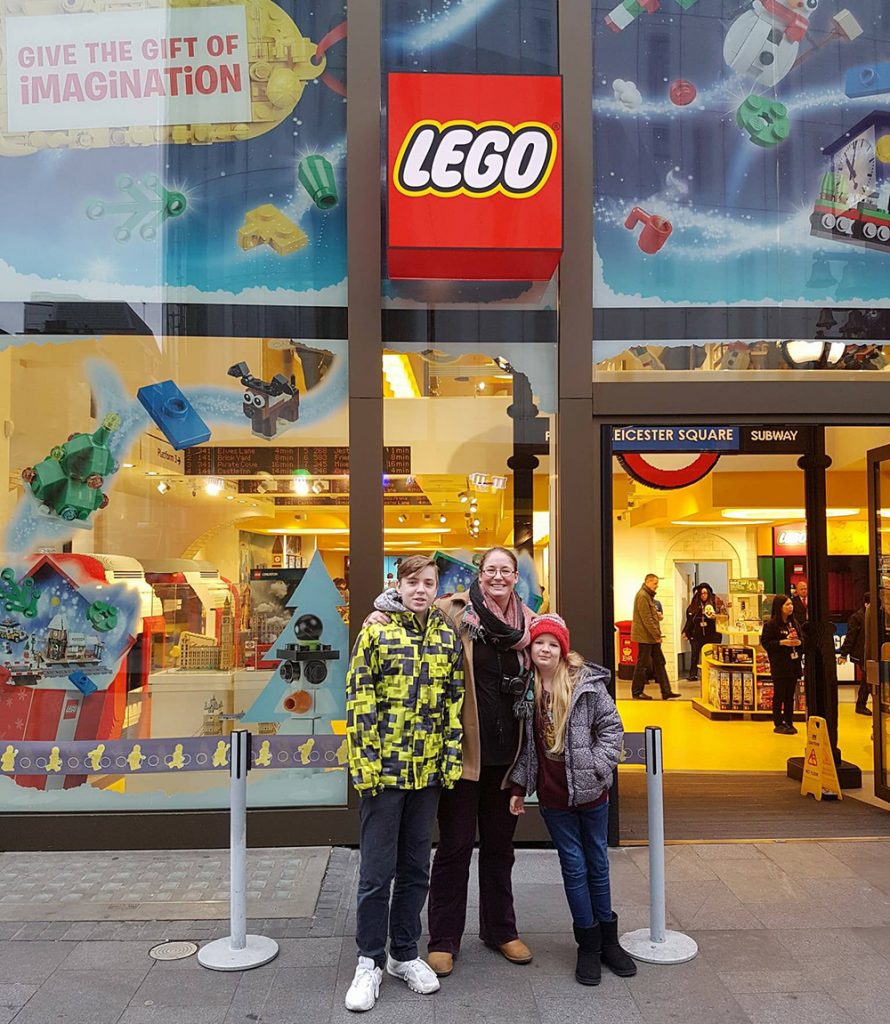 And we loved it. Naturally we all paused and examined the enormous Big Ben model, and Bear posed on the underground train. But we actually spent ages just… looking at LEGO! The upstairs floor is brilliant, with the ability to purchase individual special bricks (oh how my LEGO-obsessed oldest wold have yearned for this when he was 9, and frustrated in his need for the exact right bit). 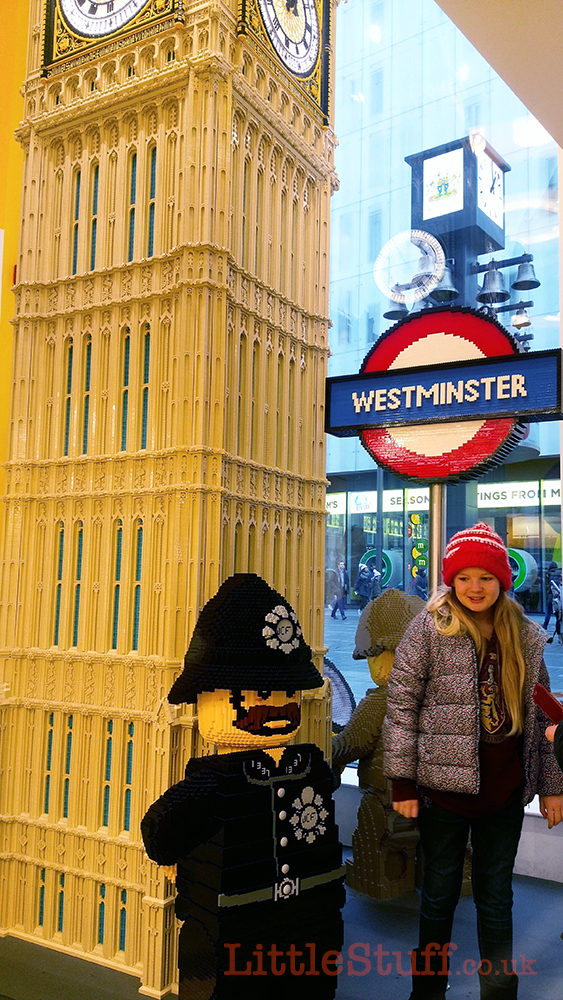 We created our own mini-figures (3 for £5, and too much fun to miss. They made one each, and a third perfect hipster LEGO man as a gift for the previously mentioned now-18yr old oldest), played with the scanner at the back which brings characters form the boxed sets alive and moving on top of the box, and basically last half an hour noodling. In the very best and true LEGO fashion, of course.
Moving on, finally, we stepped across the road and straight into M&M’s World. Fair warning – this store is BONKERS. And also – HUGE.
It doesn’t look that big, but goes down, and down, and back, and back… it’s like a tardis. The four floors of the chocolate emporium sell everything M&M’s related you could possibly think of, from pyjamas to teapots.The atmosphere is noisy and fun (weirdly much louder than LEGO), and you get sucked into the silliness of the M&M’s until you expect everything to be in a bright primary colour and circular.

The smell of chocolate hangs in the air, and the lower floor which is filled with a  gallery of M&M’s in tubes was actually a rather beautiful rainbow display. Also, y’know. Chocolate. 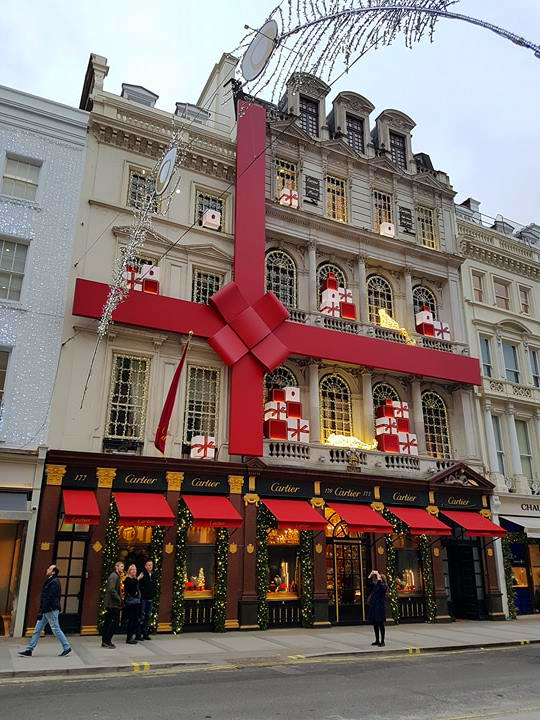 To keep things fair, once we’d filled he kids to the brim with retail madness, we took them on a stroll through the busy streets towards Piccadilly, simply stopping to look at whatever caught our eyes. Obviously the window displays were amazing, and we didn’t get very far, very fast – but it’s rare to have kids on a shopping trip still enthusiastic about shopping an hour later. Favourite shop display for Bear was Cartier (the whole building is wrapped as a present), while Jolly thought the Burlington Arcade was the ultimate in city glamour with its doorman and Narnia-like tunnel. 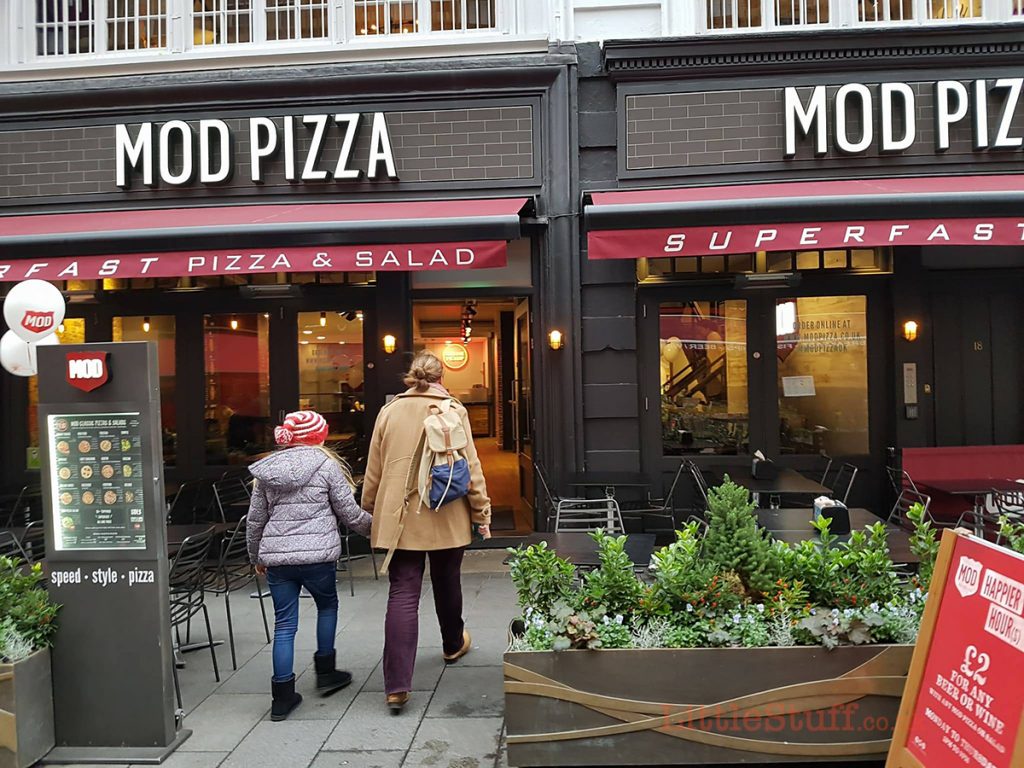 Finally, it was definitely time for a re-fuel; why is tramping the streets so exhausting? We were booked in for lunch at MOD Pizza, just off Leicester Square (and no, I’ll admit I’d never heard of them either). Turns out – this is the BEST family lunch stop. Ever.
It’s brilliant, and I’m a bit of a boring evangelist since – “oh, you’re going to the West End? You MUST try MOD pizza for lunch…”
The system is so genius it’s a wonder that it’s not been done before. You start with a basic, delicious, Italian pizza base; and a HUGE list of ingredients. And you simply build your own pizza. 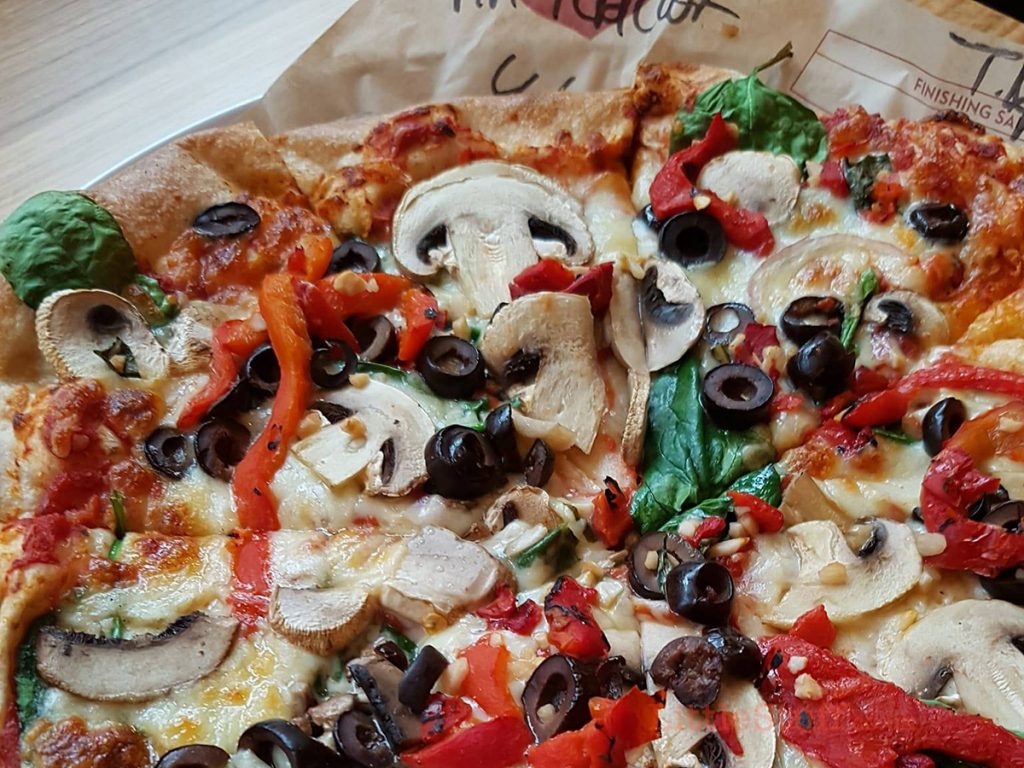 Tell them what you want, they tick the boxes, and you move along the line to pay (been to Five Guys? Same principle, but this is pizza not burgers). They don’t do anything but pizza – but they do pizza really REALLY well. Ours were universally delicious, and we all agreed it was the best pizza crust we’d had outside of Italy, and possibly came close to our all-time favourite from a small pizza-by-the-slice shop in Pisa. Best of all – it’s one price. Just under £8 for a standard pizza. That’s it. And if you make it and don’t like it? They’ll just make you another, no extra charge. GENIUS I tell you.
Staff were friendly and fun, the drinks were bottomless, and we just wish there was one closer to home. It’s the perfect family lunch stop, without question. 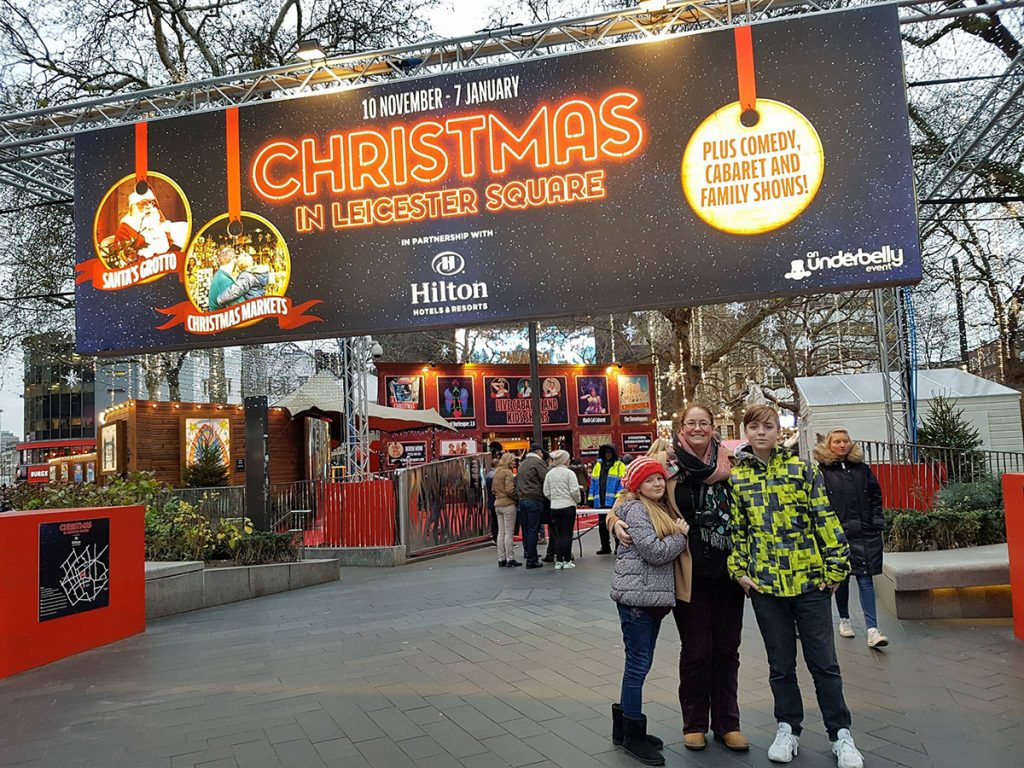 Feeling full and re-energised we strolled back to the hotel to drop our bags, and took half an hour to refresh a little (or in other words, have a power nap *looks at husband and son*). Then as dusk began to fall we stepped into the Christmas Market in Leicester Square. Oh, it’s so pretty! 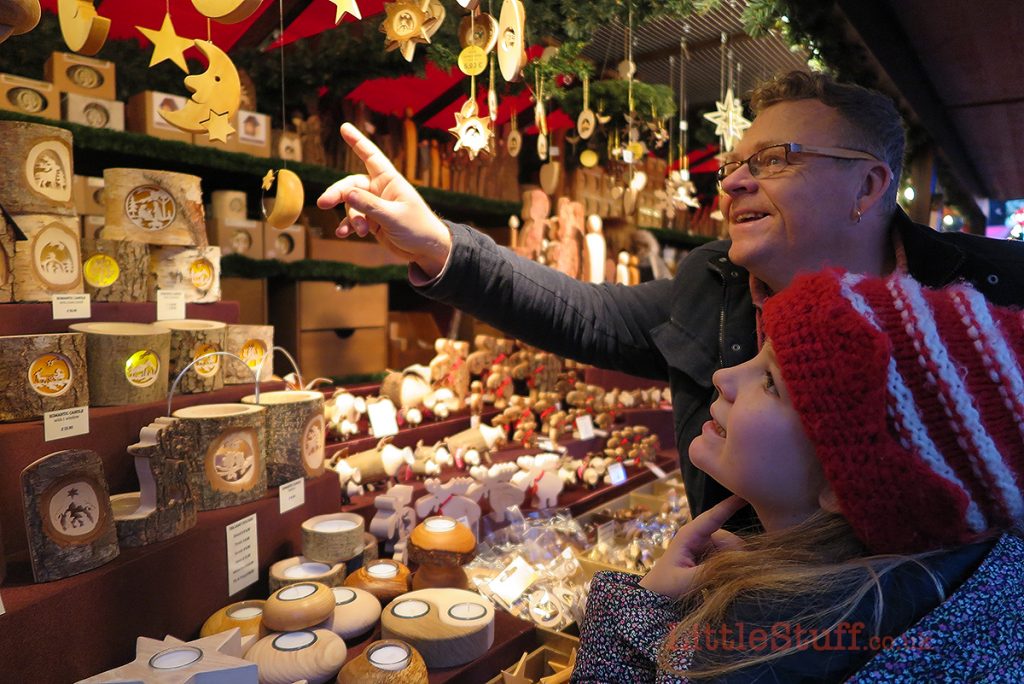 It’s a meandering route through, and we took our time, admiring the beautiful displays of spinning tealight holders, being woo-ed by the gorgeous wooden decorations, trying out the fake snow, being mesmerised by the shining garden wind spinners and trying not to eat yet more food from the amazing-smelling food stands. 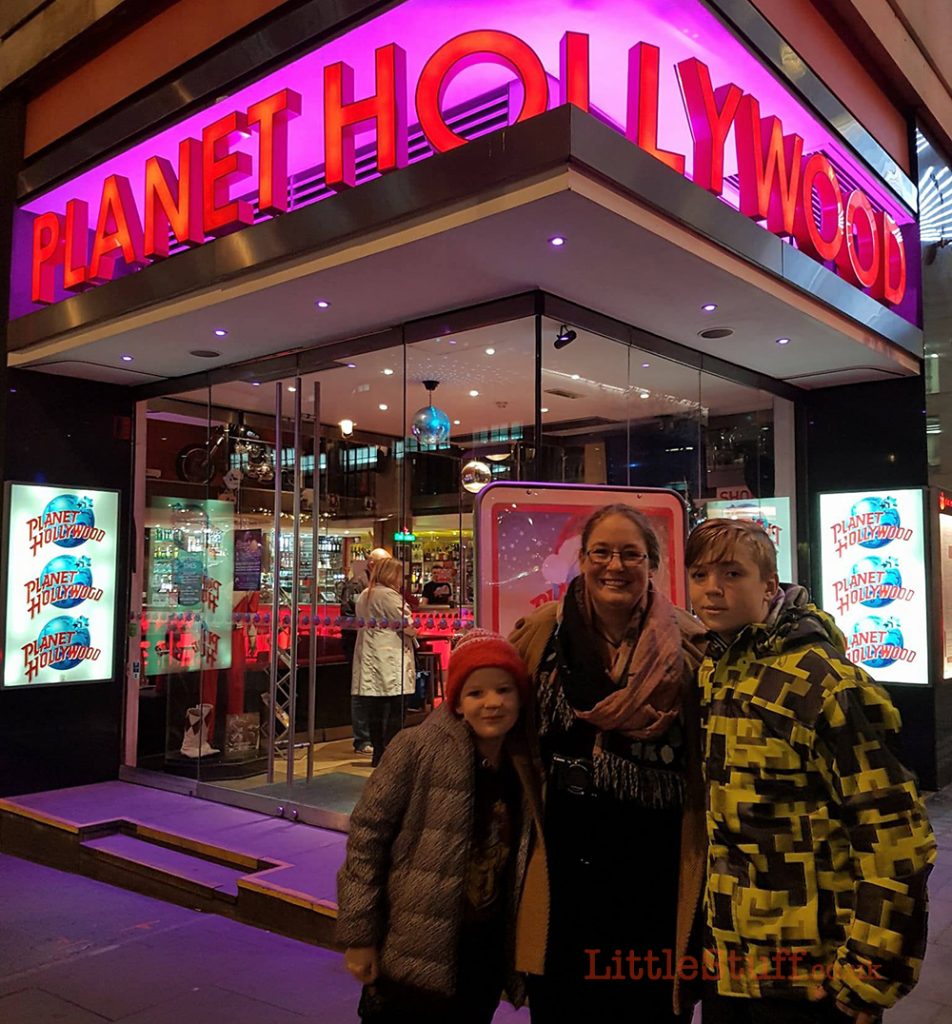 As darkness really set in, we finally made our way back to the hotel to freshen up, then took a slow stroll through the streets towards St James’, where dinner was booked in Planet Hollywood. I was equal parts excited and cynical about the reservation – I’d wanted to go ever since the first Planet hollywood opened back in the 90’s, but had a healthy suspicion that it would be over-priced and glittery frosting on sub-standard fare.
Shows what I know.

It was, frankly, brilliant. It IS loud and fun – this is not the place for a quiet or intimate dinner. But that also means it’s a totally great place to come as a family, because no one cares if you get a bit rowdy, or your child lobs their fork on the floor for the 8th time. You’re actively encouraged to get up and look around – there’s n need for sitting still with restless kids – get them over to see Han Solo frozen in carbonite. The staff are attentive but not overly-invasive, and oh, the food. So SO good. 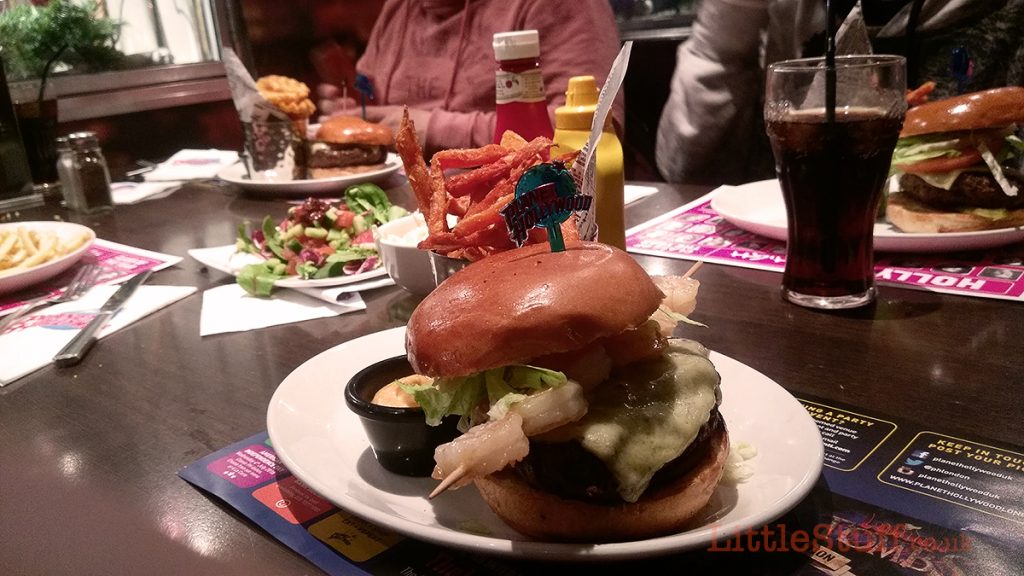 We started with the sharing platter, which was more than enough for all four of us to pick at. And then we were all terribly uninventive, and despite the vast menu we went for the burgers. Come on, it had to be done. And honestly?  They. were. amazing.
Two if us had the sweet potato fries, too – it’s criminal to miss them – and we were groaning under the weight of the amount of food we’d consumed. But then the dessert menu came out, and Bear & Jolly had been talking all day about the Planet Hollywood milkshakes (why were the milkshakes on the dessert menu? I didn’t understand that), so it would have been rude to say no. 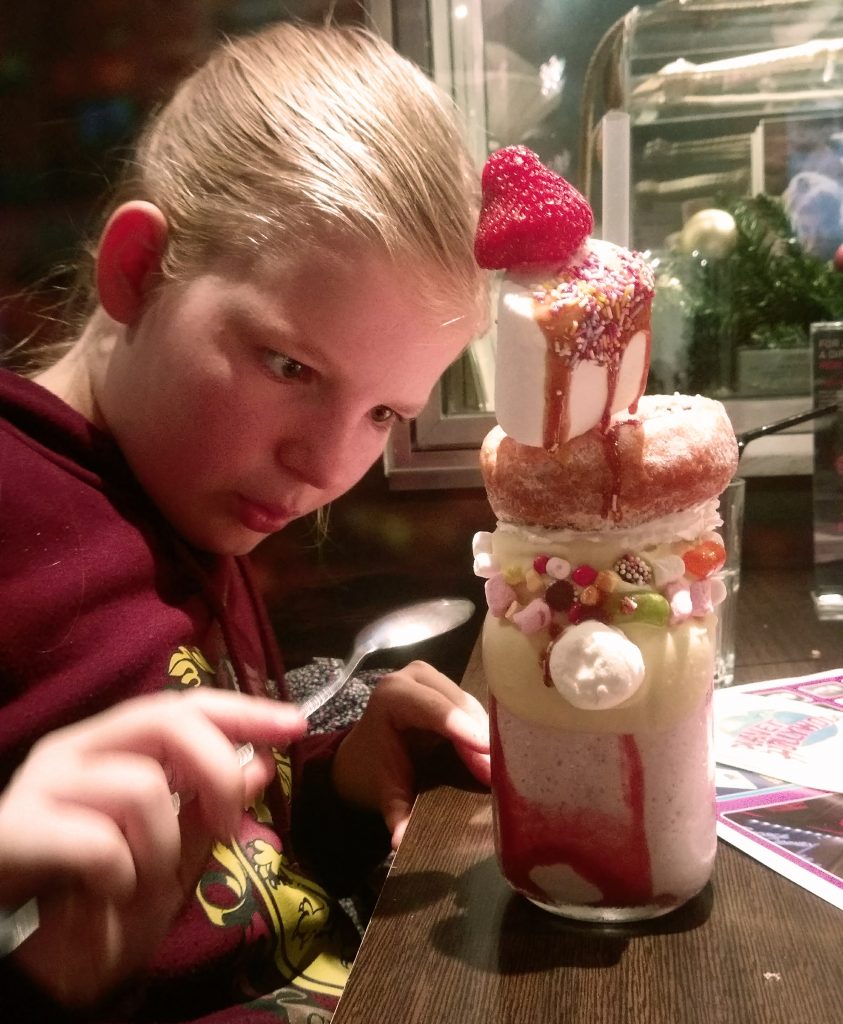 Those milkshakes were the talk of the day!

Finally, we were rolled out of the restaurant, and stepped around the corner to the Criterion theatre, where we had tickets for A Comedy About A Bank Robbery. We didn’t know much about the play, to be honest, except that it was funny, and, erm, about a bank robbery…
It’s been a few years, and Bear doesn’t recall going to the theatre, so this was her first ‘real’ experience of watching a play. I was just hoping it would be good for her. By the interval we had all been crying with laughter. Actual tears, streaming, and our sides ached. What a brilliant family show – it’s clever, physical, simple and so very very funny. It’s stupid – but in that wonderful way that makes a giggle leak out before you can stop it. A few of the jokes were slightly inappropriate for an almost-11yr old (minimum age is suggested to be 11 – there’s repeated use of one swear as a gag, and a few of the more adult physical jokes shot over her head, I think), but not anything that made her (or us) feel uncomfortable or awkward. It’s fast moving, simple, complicated, clever, stupid, and brain-teasingly brilliant. We loved it. Go and see it.

And don’t forget you still have the chance to win a Family Day Out In Leicester Square for yourself, with a meal for you and your guests at MOD Pizza, and then a family ticket to see ‘A Christmas Carol’. Just head over to this year’s advent calendar of competitions and enter day one – but be quick, it closes on the 16th as the prize must be taken by the 30th December!

An enormous thank you to all the people who hosted us for our amazing day out – we had such a wonderful day, and I’m sure they’ll all be pleased to know they’ve started a new tradition – the Christmas city break is now firmly added to the annual festive treats.